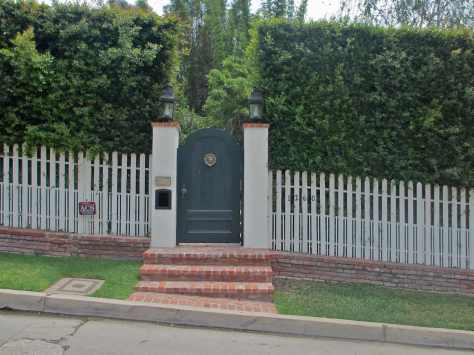 Some topics I write about in this space require my digging deep to come up with a narrative thread. That will be no problem today. My only problem will be keeping the length of this text somewhere under that of the first two volumes of War and Peace (which runs four volumes in Russian).
Igor Stravinsky (1882-1971) lived a very public life in Los Angeles, for approximately 20 years at 1260 N. Wetherly Dr. (featured here today), and then for another nine years or so at 1218 N. Wetherly Dr. He was a star when he arrived in 1940 and his star did not wane until – well, in fact, it never has.
Thanks to Eric Walter White’s Stravinsky: The Composer and His Works, we know precisely when Stravinsky arrived in L.A. and where he lived. I fully quote the first footnote on page 93: “At 124 South Swall Drive, Beverly Hills, May-November 1940; Chateau Marmont, Hollywood, March-April 1941; and North Wetherly Drive, Hollywood, after that.” Stravinsky left Los Angeles (West Hollywood) in 1969 for New York where he died two years later. I know some Angelenos who would consider that a warning to the rest of us… For the record, Stravinsky was a resident at the Essex House for his two-year New York stay.
Stravinsky arrived in the U.S. from Europe in September 1939, pushed by the early conflagration of WWII. In Dec. 1939 he traveled briefly to CA to conduct two concerts in San Francisco and Los Angeles. He returned to NY to meet the ship on which his longtime mistress Vera de Bosset (formerly the wife of the great Russian painter Sergei Sudeikin) would arrive from Europe. He married Vera on March 9, 1940, in Massachusetts. Shortly after, on April 15, 1940, the composer was arrested in Boston (“Banned in Boston”) for the horrific offense of rearranging the score of the Star-Spangled Banner. According to a book called Igor Stravinsky: The Complete Guide, compiled by the Wikipedians, he employed a major seventh chord in his arrangement, thus violating a federal law against reharmonizing the national anthem.
That tidbit was news for me and brought to my mind a similar situation that I experienced as a child – Jose Feliciano performing his beautiful Latino-tinged version of the Star-Spangled Banner in Detroit in 1968, and setting off a storm of protest and anger from uptight America…
The time of Stravinsky’s move to the Left Coast was fortuitous for him. Walt Disney’s innovative and wildly popular Fantasia was just about to be released (that happened Nov. 13, 1940), and it, of course, included a powerful scene set to Stravinsky’s ground-breaking The Rite of Spring. If anyone in the States didn’t know who Stravinsky was at that moment, they surely would know soon. (However, see page 95 of White’s book to see how Disney strong-armed Stravinsky into giving him the rights to The Rite of Spring for a relative pittance because the work was not yet copyrighted in the U.S. According to Stravinsky: “The owners of the film wished to show it abroad, however, (i.e., in the Berne copyright countries), and they, therefore, offered me a sum of $5,000, a sum I was obliged to accept.“)

The fact of the matter is that Stravinsky became a true celebrity in Hollywood. Mark Swed, the Los Angeles Times music critic, chronicles that extremely well in a 2011 blog. Swed, who himself studied music with Stravinsky at the composer’s home (presumably the later address, not the one shown here), tells of how Frank Zappa once wanted to do a version of The Rite of Spring with the Mothers of Invention. Elsewhere, we find that the late, great rocker Warren Zevon, a neighbor, also studied music with Stravinsky.
Indeed, this was, and has remained a neighborhood with genuine star quality. According to The Movieland Directory, other residents on Wetherly Dr. (at the time of Stravinsky’s residence and after he left) have included: Genevieve Bujold (1990s), Conan O’Brien (1990s), Troy Donahue (1960s), Cheryl Ladd (1990s), Suzanne Pleshette (1990s), Rita Coolidge (1990s), Tony Curtis (1960s) and Janet Leigh (1950s).
Bernard Holland ran a nice piece in the New York Times about Stravinsky’s Los Angeles years in 2001. Allow me to quote at length from that:

“A curious pilgrim follows a colonnade of three-story palm trees along Doheny Drive, across frenetic Sunset Boulevard and up the narrow winding street to 1260 North Wetherly Drive. The Stravinsky house is small — white stucco and wood — on rising ground and sheltered by green growth around it. The interior, we are told, was artful clutter: the furniture was worn; the books were many. North Wetherly was the site of Stravinsky’s first sustained domestic happiness after the lingering illnesses and deaths of his first wife and his older daughter, and his subsequent marriage to Vera de Bosset Sudeikina in Bedford, Mass. Two of Stravinsky’s four children eventually came to America: Soulima, teaching piano at the University of Illinois, and Milene, settling in Los Angeles.
The Stravinsky friends were polyglot, international and many. There were the Russian and German enclaves, but also a detachment of British writers, like W. H. Auden, Christopher Isherwood, Dylan Thomas (who shared the composer’s taste for hard spirits) and, especially, Aldous Huxley, with whom Stravinsky spoke in French.
Years later, Mr. Salonen considered buying the house, which had fallen on hard times. The conductor noted the carpet indentations where the great man’s pianos had stood, the hook where a goat had been tethered (Stravinsky liked the milk) and the built-in couch where Thomas had slept off more than a few over indulgences. An aspiring composer himself, Mr. [Esa-Pekka] Salonen wisely feared the presence of ghosts.
[Conductor Otto] Klemperer and others performed Stravinsky’s pieces at the Philharmonic. The composer himself appeared as pianist and conductor. Even the gaping Hollywood Bowl embraced the Stravinsky of The Firebird. The publisher Boosey & Hawkes eventually provided him a comfortable annual retainer, and there were the constant tours and travels for a man less famous than Clark Gable but not too far behind.”

Allow me to quote from still another source, this one from L.A. blogger Patrick Swanson:

In the summer of 1946, Igor Stravinsky was a freshly naturalized citizen of the United States. A fit and healthy 64 years of age, he was happily settled with his second wife (painter Vera de Bosset) in a cozy house nestled at the foot of the Hollywood Hills. Stravinsky-worshipers who make the requisite pilgrimage to 1260 North Wetherly Drive are in for a surprise when they see that the house that bore so many hallowed masterpieces of 20th century music (Symphony in Three Movements, The Rake’s Progress, Agon) is mere yards away from that mecca of flashy dross known as the Sunset Strip. Does Stravinsky’s ghost ever haunt Ryan Seacrest? He could if he wanted to. To experience one of those surreal juxtapositions of which Los Angeles excels, go to the house on a Friday night and think of Stravinsky working out the haunting medievalisms of the Mass (1947) on his muffled upright; then, walk down the hill until you are in front of the Roxy Theatre, where the spray-tanned and spiky-haired gather to watch a DJ press the ‘play’ button on his iTunes.
The Los Angeles that Stravinsky called home for over 20 years had its own absurdities. During the war, the city’s blend of endless sunshine and endless creative (and financial) opportunity proved attractive for hosts of European intellectuals and artists seeking safe haven from Hitler’s Europe. Many flocked to  Hollywood to work for the booming film studios (Erich Korngold); Stravinsky’s great rival, Arnold Schoenberg, who had his own flirtations with Hollywood, settled nearby (about 20 minutes west on Sunset) in Brentwood, just down the street from Shirley Temple. When he wasn’t playing with permutations of the 12-tone row, Schoenberg could be found playing ping-pong and tennis with Charlie Chaplin and George Gershwin. (Schoenberg and Stravinsky, however, made sure to avoid each other.) It must have been a dizzying place. Invited to a cocktail party at the Stravinskys? Start boning up-you are going to be talking hallucinogens with Aldous Huxley, the Nuremberg Trials with Thomas Mann, nuclear bombs with Bertrand Russell. Even with all the imported brains, the Stravinskys managed to live a relatively normal LA existence. Vera Stravinsky’s diary for January 21st, 1948: “Sunbathe, and I drive Igor in the hills to air out his hangover.”

Stravinsky’s home at 1260 Wetherly Dr., at least these days, is almost entirely hidden from view. I had to fight back my sense of propriety and my own disgust at the manners of paparazzi  in order to get a decent shot of the house over the thick, tall hedges protecting the building and yard. I forged ahead, however, overcoming my reticence, in order to serve the god of history and information. The first shot in the block immediately above gives a decent view of the house. If you’re interested in other pictures of this house (and of other physical sites connected to Stravinsky around the world), you can find some nice ones on Katya Chilingiri’s photo website.  The Igor Stravinsky Foundation Facebook page publishes a nice photo of the composer playing a game of solitaire right here at his Hollywood home.
This post has already gone on unconscionably long. But if you’re interested in the topic I must also direct you to a nice tale of the relationship between Stravinsky and Aldous Huxley in Murray Pomeranoe’s Michelangelo Red Antonioni Blue: Eight Reflections on Cinema, and to a review of the film Stravinsky in Hollywood, which provides some great information on the composer’s work during his L.A. period. 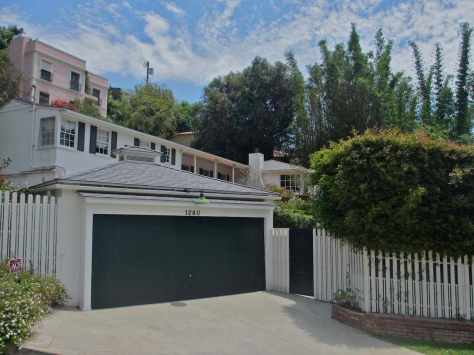 Join 115 other subscribers
Follow Russian Culture in Landmarks on WordPress.com