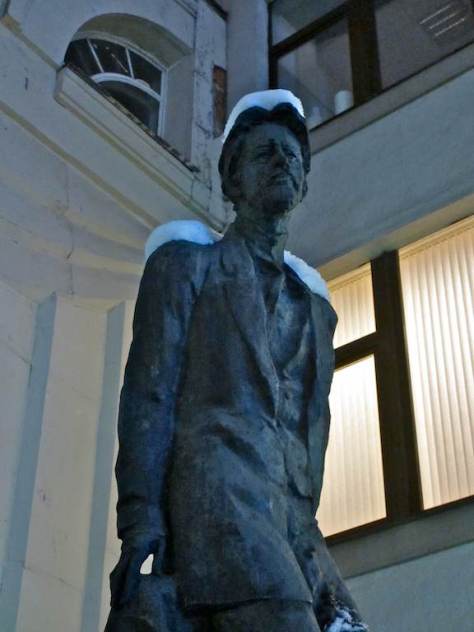 This is one of the most maligned statues in Moscow, for all of the wrong reasons to my mind. I hate to begin with this, but everybody else talks about it first of all. I could ignore that, you say, and you’d be right. And maybe I should. But I also want to have my say about it because I’ve never agreed with the complaints.
To the point: It seems to really irritate people that there used to be two public restrooms right where this statue of Anton Chekhov was unveiled in 1998 during the celebrations of the 100th anniversary of the Moscow Art Theater.  It doesn’t bother anybody that the prestigious Chistiye Prudy, or Clean Ponds, region of Moscow is built on an old dumping grounds for the reeking remains of butchered animals. And rightly so. Things change. Big deal. So there were restrooms here? I remember my beloved mentor Alma Law going off about this and I could never understand it. I remember the restrooms. They kinda stunk when you walked by. I never went down in there – didn’t quite have the nerve, even if I had the need a time or two. So, for me, it was a great thing to close those things up and put them in the slot where all those things from the past go that we are able to forget. But no! Seventeen years later people are still making snide comments about the restrooms that used to be here, are long gone, and will never again rise to stink! What is the deal? I say it because I saw a comment on the net yesterday about my post about Nemirovich-Danchenko and Stanislavsky – somebody just had to bring up the old restrooms back in the corner of one of my photos. With all the things to talk about in Russia and the world!…
For the record, this statue was sculpted by Mikhail Anikushin, who died a year before it was unveiled. There is information, repeated in Russian Wikipedia, that then-Moscow Mayor Yury Luzhkov is the one who decided that the monument would stand in this corner in place of – yes, the former restrooms! – and before one of the walls of the once-famous Hotel Chevalier, which sheltered many great Russian writers and personages in the 19th century. I’ll get to that some day on this blog. 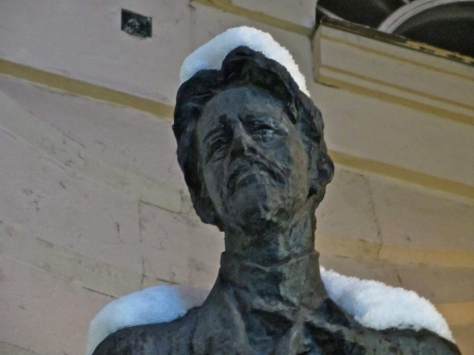 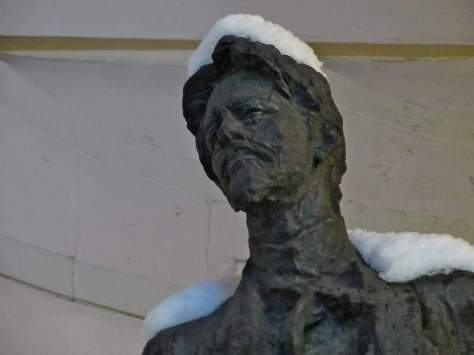 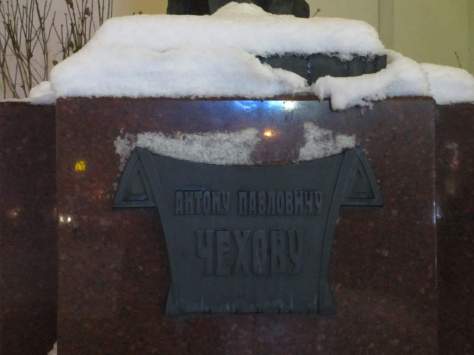 I love Anikushin’s work. It is precisely what I look for in sculptural art – it is a rendition, an interpretation. Sure he gets the general likeness, for which we are grateful. But that exaggerated lean, almost gaunt look is an interpretation, a suggestion. It makes us think about Chekhov, his life, his beliefs , his art. It is also true of the face, which I really love. There is something of the Pieta in this, isn’t there? A kind of mix between the expressions both Mary and Christ that are given by various artists working with that subject. And that suits Chekhov. This is a face that knows so much, almost too much for the individual to bear. As with any good work of sculpture, the expression changes as you move around it. Look at the two close-up shots above, taken almost, but not quite, from the same angle. I see something approaching stoicism in the first, an attempt to be strong against suffering, while in the second I see suffering beginning to take precedence. Actually, go up to the top photo and you see still another aspect – here there’s a kind of resignation and sorrow that predominates the image. All of these suit well the man who wrote “The Steppe,” “The Black Monk,” “Three Sisters,” “The Cherry Orchard” and much, much more.
I wrote in yesterday’s post about how the new monument to Nemirovich-Danchenko and Stanislavsky now marginalizes this Chekhov monument. You can see that in the last photo below. Chekhov really looks stuck in a corner now, dwarfed and diminished. Before the appearance of the new statue, one’s attention when arriving on Kamergersky Lane was drawn immediately to Chekhov. No more. He is now an afterthought. Ever since he appeared and ever since that silly restroom debate unfurled, there has been talk about moving the monument. I wouldn’t be surprised if that were to happen now. To my tastes, anyway, this is too good a work to be shunted off into the shadows. 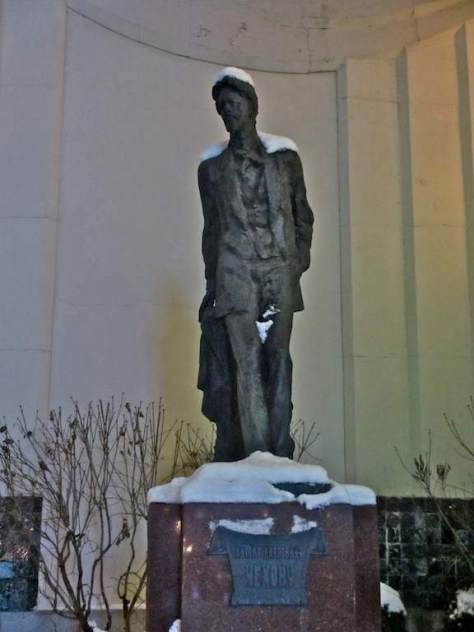 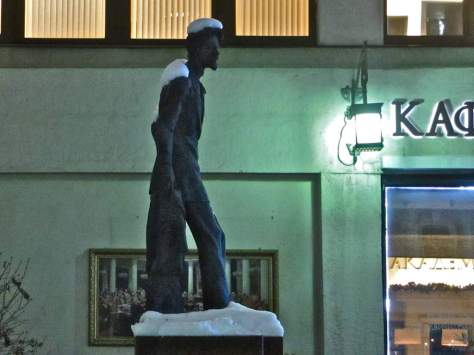 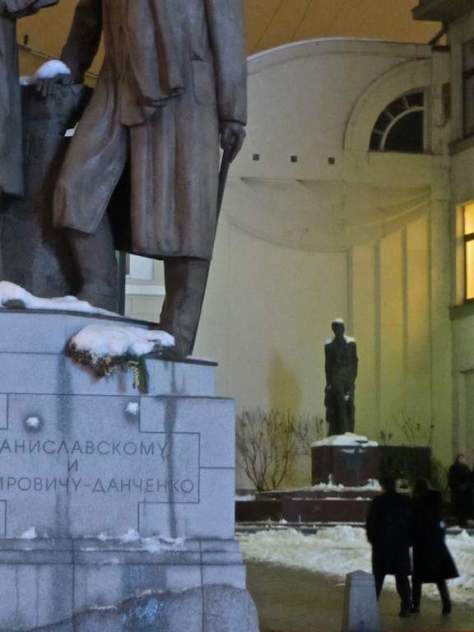 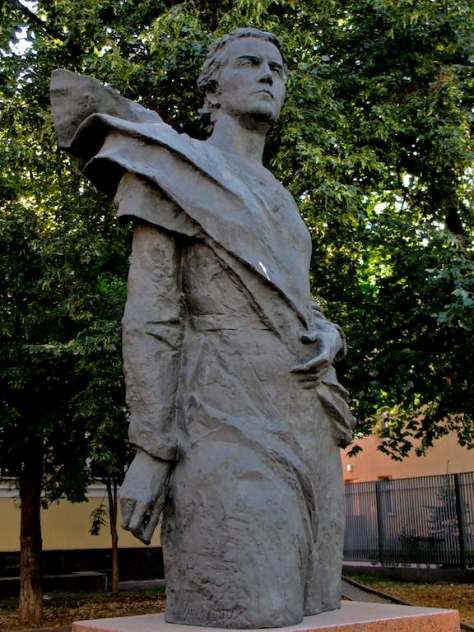 This sculptural image of Vera Mukhina (1889-1953) is relatively small, which is an interesting thing. Mukhina was one of the most prominent and important of all the monumentalist sculptors. Many of her  works were huge. Easily her most famous is The Worker and the Kolkhoz Girl, which has stood for decades at the entry to the Exhibit of National Achievements in Moscow. It was set up there after first being unveiled – with wild international success – at the Paris World Fair in 1937. The fascinating School of Life site has many unusual tidbits about Mukhina’s life and work and it points out that the sculpture, created in Moscow, weighed 75 tons and had to be cut into 65 segments transported on 28 train cars in order to get it to Paris. So famous is this sculpture I would say that for awhile it has worked against Mukhina’s reputation. The figure of a young man and a young woman marching forward in lock step as they hold a hammer and cycle on high is so ubiquitous and is so bound up in images of stagnant and hostile eras of Soviet history, that it has long been hard to appreciate the work on its own merits. It looks much more like a cliche than a great work of art today, at least until you stop and take the time to ponder it.
There is no doubt that Mukhina was tight, in some ways, with a state that saw and used monumentalism as a way to express and reinforce its superiority. Mukhina was the recipient of five Stalin Prizes in her career (1941, 1943, 1946, 1951, 1952). She was given prestigious commissions to create centrally-located, highly visible public art. According to her son, however, she never once created a bust or sculpture of leading Soviet politicians, although she was asked to many a time, and her husband, the prominent doctor Alexei Zamkov, was repeatedly harassed by the authorities in those moments when he wasn’t being spared or given unexpected opportunities. In short, the family walked a narrow line in a very difficult time. I wrote in late May about a monumental sculpture of Maxim Gorky that Mukhina was instrumental in completing shortly before her own death and 10 years after the death of the primary sculptor Ivan Shadr. When one digs into the details of Mukhina’s life one sees why she may have been compelled to help finish the image of Gorky – he was instrumental in obtaining permission for Mukhina and her husband to return to Moscow from exile in Voronezh. They had attempted to slip out of the country in the early-to-mid-1930s and were caught, detained and exiled.
Another of Mukhina’s most famous works is the monument to Pyotr Tchaikovsky which stands before the Moscow Conservatory. That was no easy commission, however. The original commission was made in 1940 but work was interrupted by the war. Only in 1945 did Mukhina present her first “draft” of the future monument. It, however, was rejected by the inspection board. A second variant was given the okay two years later, but it still took eight more years to get the official order to place the sculpture before the Conservatory. By the time of the unveiling in 1954, Mukhina had been dead for nearly a year. 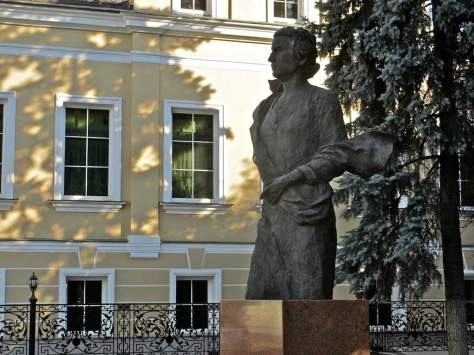 The likeness of Mukhina stands on a tiny, nameless square more or less at the intersection of Prechistensky Lane and Prechistenka Street in the Arbat region. Sculpted by Mikhail Anikushin with the aid of architect Sergei Khadzhibaronov, it was unveiled in 1989 as part of the celebration of Mukhina’s centennial.
The piece reflects her reputation as a principled person with a difficult personality. I mention that latter bit only because you run across it a lot when reading about Mukhina. I don’t doubt it’s true, knowing what I know about her life, her work and the era that she inhabited. What I do doubt is that there is anything of value to be had in applying such epithets to her. That she was a strong person with a strong vision is already evident in the fact that she made sculptures weighing 75 tons. It’s also evident when you consider the tight-rope walk she and her husband had to walk in order to keep working and living. In other words, I report that bit of information that everyone else reports, but I encourage you to toss it out as useless.
Anikushin – perhaps – shows Mukhina wrapped in the same scarf and buffeted by the same wind as the young man in the sculpture of The Worker and the Kolkhoz Girl. It’s a nice little quote and it works especially well because, as I said, this sculpture is relatively small and, in no way, attempts to approximate Mukhina’s own work. Anikushin also did a nice job of imparting to Mukhina’s expression that strength we know she commanded, even if it might be a tad off-putting, while also giving her a very human, thoughtful gaze. There is, in other words, a subtle mix here of the public and private flowing back and forth into one another. There is something in that which captures the essence of at least one aspect of the Soviet experience.
Mukhina and her husband are buried in the hallowed – and prestigious – ground of the Novodevichy Monastery on the banks of the Moscow River. I love the words that are engraved on their headstone. Dr. Zamkov, who died in 1942,  is quoted as saying, “I did for people everything that I could.” When Vera herself was buried, her own words were added: “Me too.” 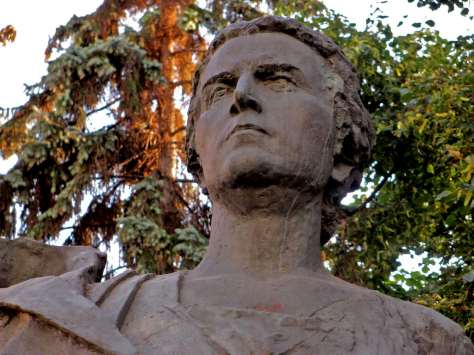 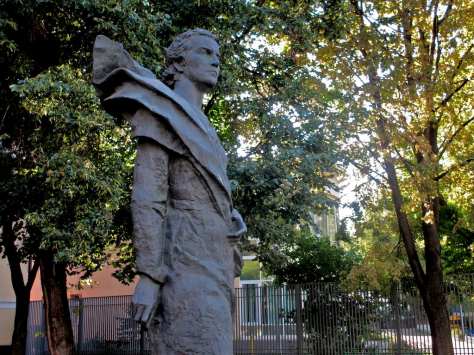 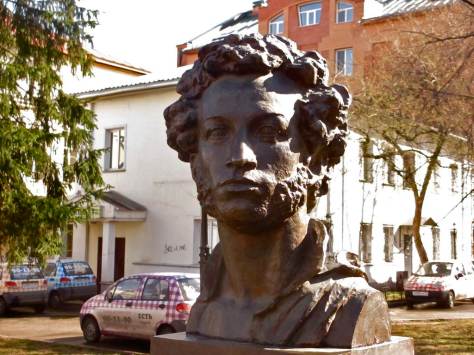 I rarely allow myself to be so predictable as to do anything according to someone else’s timeline, but today I’ll succumb. It is Alexander Pushkin’s birthday. He was born 215 years ago today. Anybody, or everybody – or, maybe, nobody – can tell you what that meant for Russian culture. “Pushkin is our everything.” Every individual has “my Pushkin.” Gogol called him “the unique phenomenon of the Russian spirit”; Dostoevsky upped the ante and called him “a prophetic phenomenon.” I would say that people walk up and down the streets of every Russian city and village spouting the verses of Pushkin but you wouldn’t believe me. Still, if I did make that assertion I would only exaggerate in the slightest degree. Moreover – and this may be the most incredible thing of all – Pushkin has not been sullied, has not been appropriated by ideologues (although they have tried), has not been commercialized. Pushkin is pure. He’s the real thing. He is poetry, he is wisdom, he is clarity, he is simplicity, he is the opposite of bombast, he is the best that Russia ever put forth and he continues to symbolize the best that Russia has or is. 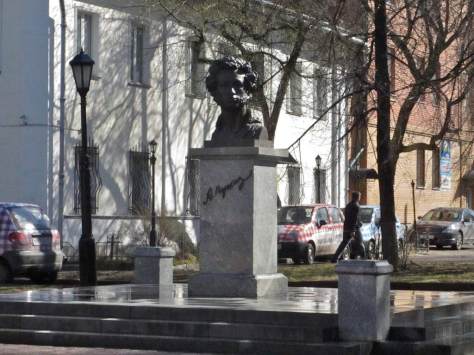 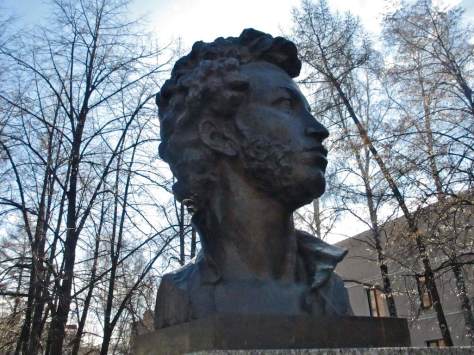 The bust I photographed here stands in the tiny little Pushkin square on the east side of Lenin Prospekt, between  buildings No. 77 and 83 in my beloved city of Tomsk. In the hands of sculptor Mikhail Anikushin he’s a generic Pushkin, rather an imitation, perhaps, of the image created in the famous and beloved portrait of Pushkin that was done by Orest Kiprensky in 1827. Upon seeing that completed portrait, Pushkin supposedly remarked, “The mirror flatters me.” Well, a whole nation would flatter the man for his poetry, his prose, his drama, his wisdom, his wit and the glint that, surely, sparkled in his eye. 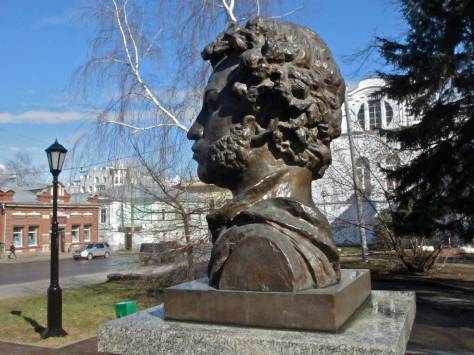 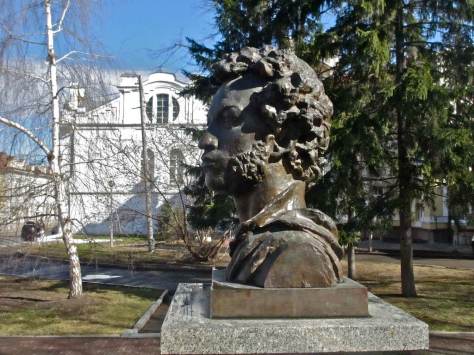