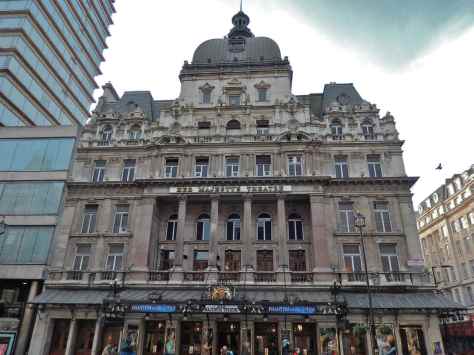 I have Natalia Dissanayake and her wonderful book Russian Lives in London (Russkie sud’by v Londone) to thank for today’s post. The photos have been lying around in my archive for several years, waiting for a reason to be used. Surely I had a reason to take them – there must have been some Russia-connected event that took place here at some time – mostly likely a performance of the Ballet Russes. Then I happened to pick up Dissanayake’s book the other day and, as I often do, I leafed through the pages looking for interesting stories. It’s chock full of them, I’m never disappointed. And sure enough, on pages 290 to 292 I came upon the tale of Lidia Yavorskaya, about whom I knew very little other than the fact that history claims she was a model for Anton Chekhov’s Arkadina.
Yavorskaya was a star in Moscow at the turn from the 19th to the 20th century, and she had a good deal of success in London as well. Born in Kiev in 1871, she studied with Vladimir Davydov in St. Petersburg, and in Paris with François Jules Edmond Got, an actor of the Comédie-Française. With her parents opposing her desire to be an actress, she simply forged ahead. She married – against her parents’ will – and quickly divorced him when it became clear he did not support her either. She debuted in 1893 in the city we now know as Tallinn, Estonia, and quickly found herself playing star roles in Moscow at the famed independent (non-state) Korsh Theater. Two years later Alexei Suvorin invited her to St. Petersburg to take the lead with his troupe in the Literary-Art Circle Theater. She remained in St. Petersburg for over a decade, continuing her successes. However, she once again showed her independence by taking the brave step of leaving her position at the theater when she refused to perform in a play that she deemed to be anti-semitic. She performed for several years in a theater of her own making, the Novy, or New, Theater, where she favored cutting-edge, contemporary drama – Anton Chekhov, Lev Tolstoy, Maxim Gorky, Henrik Ibsen, plus plays by her husband Vladimir Baryatinsky. According to Dissanayake, the New Theater was particularly popular with young people. However Yavorskaya and Baryatinsky struck out in 1907 on a series of tours that took them to Russian provincial cities as well as, eventually, Vienna, Paris and London. It was in 1909 that they arrived in London. According to Dissanayake:
“[Yavorskaya’s] small troupe had such success at His Majesty’s Theatre on Haymarket Street, that people began urging the actress to perform in English. She spoke French and German fluently, but she had to put a good deal of work into her English pronunciation and, despite excellent results, she limited herself to playing foreigners. She debuted in John Pollock’s Rosamund and a one-act play by her husband, Nablotsky’s Career, at the Little Theatre on what was then known as John Street. There she also played Nina Zarechnaya in The Seagull, and at the Kingsway Theatre staged the first production in England of Chekhov’s vaudeville The Bear.”
So, there we have Yavorskaya at His Majesty’s Theatre, as it was known from 1901 to 1952. It is, of course, currently known as Her Majesty’s Theatre. 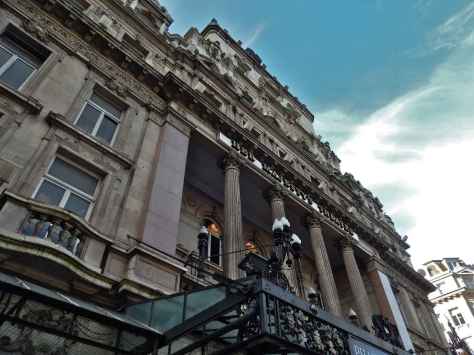 Life, however, interrupted what looked like was going to be a sustained period of success for Yavorskaya. Her husband, homesick, headed back to St. Petersburg at the beginning of World War I. She followed him, but was blindsided when he asked for a divorce in 1916. The Holy Synod of the Russian Orthodox Church granted Baryatinsky’s request and forbade Yavorskaya from remarrying for some time. She, however, always the rebel, headed back to London in 1918 after getting the Russian government to remove the ban, and married the playwright John Pollock in 1920. She died a year later of throat cancer at the age of 50. She is buried in a church cemetery in Old Shoreham, Sussex.
There are plenty of opinions about Yavorskaya. One Russian site boils down many of them into a single paragraph:
“The popular dramatic actress Lidia Yavorskaya was one of the most controversial figures in the theatrical world of the early 20th century. One could not deny her astonishing work ethic and dedication, but that was combined with vanity, egocentrism and ambition. Theater critic Suvorin called her a phony creature, made of pretense and envy. Chekhov considered her an intelligent woman, but an overly loud and mannered actress. Despite this, they had an affair and it is said that Yavorskaya served as the prototype for Arkadina in Chekhov’s The Seagull.”
Other sites collect a whole bunch of catty comments about Yavorskaya by famous or semi-famous people. But if you know how to read these things, you see the limitation is stronger on the part of the writer or speaker than on the part of the individual being described. There is something mean and petty in a lot of the comments. I suspect we see more of the actress in Dissanayake’s description of her:
“She was very interesting, with big, gray-blue, ‘mermaid’ eyes, a quick smile, golden curls, a beautiful figure, light, energetic movements and a kind of snake-like grace. Those who loved her said, ‘She’s no beauty, she’s better.'”
After returning to London in 1918 Yavorskaya was very outspoken in her opposition to the new Soviet regime, even as she did much to collect money to help feed the hungry in the Soviet Union. She was the chair of the Britain-Poland-Galicia fond, and she created the Society for Aid to Russian Artists, Victims of the Bolshevik Regime.
The anarchist Pyotr Kropotkin dubbed her Lidia Miss Freedom (Lidia Svobodnitsa) for her convictions and actions.
In her final years, Yavorskaya continued to perform in London at such venues as the Royalty Theatre on Dean St., the Coliseum on St. Martin’s Lane, the Ambassadors Theatre on West Street, the Scala on Charlotte Street, and elsewhere. It was at these latter two venues that she performed the title role in Anna Karenina, one of the highlights of her career.

Vladimir Nabokov, as the plaque on the wall of this building at 47 Bolshaya Morskaya Street in St. Petersburg states, was born here in 1899. He died, every bit the contemporary of people of my generation, in Switzerland in 1977. By then his novels had made him famous and rich. The one that helped him turn the corner to fame was Lolita (1955), although there is much discussion about which of his works are the best and most-loved. That’s an open topic, you don’t need me to weigh in on it. Especially since I’ve never been infected by the fascination that many have for his craft.
In the spring of 2019 controversy came to this building where a Nabokov museum has been located for many years. In one of those typically contemporary Russian incidents, conflict came out of the blue for those who had been charged with overseeing the writer’s cultural legacy. The museum was closed with no warning, several employees were fired, others had their pay cut, the museum director was threatened, and workmen answering to someone else moved in and began restoring the building. A hue and cry went up, with many prominent individuals, including novelist Viktor Yerofeev, coming to the museum’s defense. It seems the museum somehow had been taken over by St. Peterburg University (a nominal “parent” in the past) and was being put in the hands of a St. Petersburg writer and teacher named Andrei Astvatsaturov. After a month or so of confusion in the media, the new director officially stepped into his position on April 26. He declared that all was now well, that his new leadership was in place, and that he was preparing to transform the Nabokov Museum into an international cultural and conference center. One of the reports, surprisingly neutral in its tone since it belongs to the scandal-mongering NTV network, admits in the last line that the former director, Tatyana Ponamaryov, knew nothing about the new one.
If all of that doesn’t sound fishy, you haven’t paid attention to real estate conflicts in Russia over the last 20 or 30 years. By the nature of my work over that period – writing about culture for a Moscow newspaper – I can say that this has all the hallmarks of a hostile takeover. You do it quickly, without fanfare, close things up for “restoration and renovation” so nobody can get in and see what’s happening, and you trust to your connections in the “courts,” or just hope your opponent will take the hint and disappear. As the old saying goes, “possession is nine-tenths of the law.” In any case, the museum is now open again, and Mr. Astvatsaturov (a descendant of the famed literary scholar and linguist Viktor Zhirmunsky) is in control.
This is the way Nikita Mikhalkov essentially stole the Cinema Museum from Naum Kleiman in 2013 in Moscow, and it’s similar to a scandal at Moscow’s Mayakovsky Museum, which was closed ages ago in a battle over who is going to control it. I can’t say for sure that the situation at the Nabokov Museum is exactly the same, but when there’s smoke, one does tend to wonder if there is fire.

The basic building at 47 Bolshaya Morskaya was erected around 1740. The street at that time was called Bolshaya Gostinaya (Great Parlor St.), was known popularly, though not officially, as Brilliantovaya (Diamond Street) at the time of Nabokov’s birth, and officially took on the name of Bolshaya Morskaya (Great Sea St.) in 1902. It was known as Herzen Street for most of the Soviet period. At the time of its original construction it was a single-story structure over a raised basement. You can see the lines of the original house in the full photos above and below – it corresponds to the red first floor in today’s configuration. As I understand it, a second story was added at the end of the 18th/beginning of the 19th centuries, followed by significant additions to the sides and interior in 1874. Finally, a third floor was added in 1900-02, while much of the external decoration was moved, apparently with some care. This came shortly after the building was acquired by Nabokov’s grandfather in 1898 with the purpose of turning it over to the future writer’s mother Yelena Rukavishnikova at the beginning of her marriage to Vladimir Nabokov, son the Russia’s Minister of Justice Dmitry Nabokov, and future prominent journalist and statesman in his own right.
Depending on the source, one can find dates that are off by one or two years from those I offer here. Some sources say the house was purchased by Grandpa Rukavishnikov in 1897, some say the last renovations took place beginning in 1901, various sources claim that Nabokov lived here either 18 or 20 years. I follow the dates offered in a relatively detailed and convincing piece on the website of a company whose business is renovation, but let’s agree that they are approximate. Nabokov described this home in varying degrees in his autobiographical works Other Shores and Speak, Memory! His room, following the reconstruction, was located on the third floor.
From that same website:
“The Nabokov House is a vivid synthesis of architecture and decorative art. The building is topped with what can be safely called a mosaic frieze that runs the entire width of the facade under the wooden rafters of the roof overhangs, created by the well-known workshop of V. A. Frolov. Thin lacy patterns of wrought metal contrast with the stone surface: parapet fences, flag holders, forged leaves, flowers, curls, and so on. The mansion is notable for its rich interiors, preserved from the former owner of the house, N. M. Polovtsova. All rooms are designed in various historical styles, to which modernity has been added.” 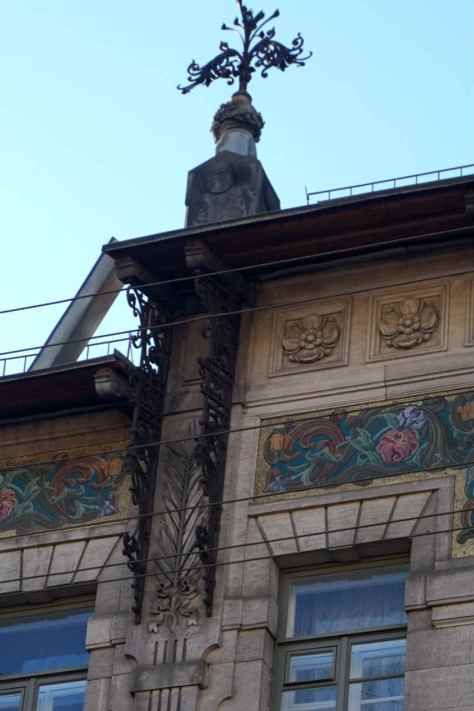 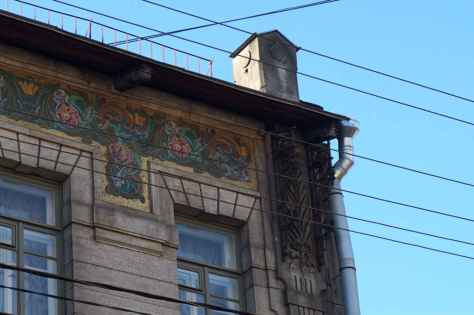