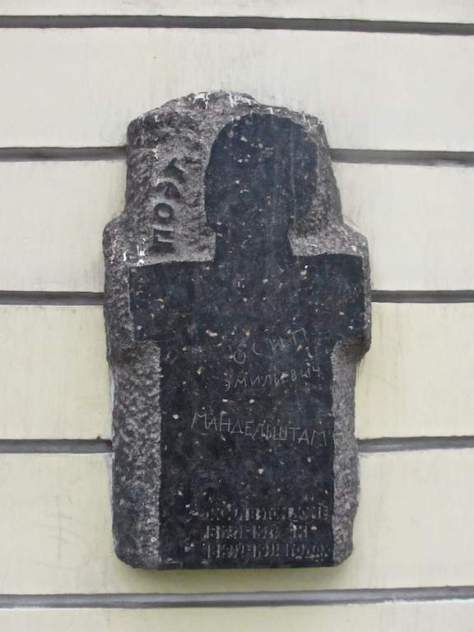 I’ve been hanging around the same basic place in Moscow this week. The Yermolova House, which I wrote about a couple of days ago, is a few doors down from the home we’re talking about today at 25 Tverskoi Boulevard. Yesterday I wrote about the Alexander Herzen statute which stands right next to it, because Herzen was born here. Today we’re interested in the house because the great poet Osip Mandelshtam lived here in 1922 to 1923 and then again from 1932 to 1933. This was quite a place actually. Aside from the Herzen connection, and the fact that Mandelshtam and Andrei Platonov lived here (I’ll write about Platonov soon), this was the site of a popular literary salon hosted in the 1840s and 1850s by the Russian diplomat and memoirist Dmitry Sverbeev. The so-called Sverbeev Fridays were frequented by Herzen, philosopher Pyotr Chaadayev,  poets Nikolai Ogaryov and Yevgeny Baratynsky, and prose writers Konstantin Aksakov and Nikolai Gogol. The literary critic Dmitry Blagoi lived here, as did, more briefly, the writers Mikhail Prishvin, Vsevolod Ivanov and Boris Pasternak. Russia’s primary literary institute, named after Maxim Gorky, has been located here since the 1930s. Finally, this is the place that Mikhail Bulgakov had in mind when he satirized the writers club in The Master and Margarita, in part because this is where the notorious RAPP, Russian Association of Proletarian Writers, was located in the 1920s.

Mandelstam (which is pronounced “Mandelshtam”) wrote about his humble abode, which he shared with his wife Nadezhda, to a friend in the spring of 1932: “They gave me a space in a damp wing that is not suitable to be lived in. It lacks a kitchen, the faucet for drinking water is located in a rotting bathroom with moldy walls and plank partitions, a freezing cold floor, etc. I didn’t get the room that was allocated to me in the wing right away and was temporarily situated in a tiny hole of 10 meters where I spent the whole winter.” So much for any sentimental thoughts of the great poet living it up in one of Moscow’s most famous buildings. Of course, the notion of sentimentality and Mandelstam do not mix in the least. He was a spectacular poet of superb technical prowess. His prose writings are considered to be among the crispest and cleanest of any in the language. Born in 1891, he published his first verses as a student in 1907 and published his first book in 1913. He studied abroad in Germany but chose to return to Petersburg to enter the university in 1911. This is important in regards to the plaque that was erected in honor of Mandelstam on the facade of 25 Tverskoi Boulevard.  Because in order to enter Petersburg University the Jewish Mandelstam was compelled to convert to the Methodist faith. This explains, I guess, why the plaque commemorating this great Jewish poet is designed in the form of a cross. The bulk of Mandelstam’s work came between 1922 and 1933, coincidentally, perhaps, the years that begin and end his time in this building. Somebody in Soviet Russia had it in for Mandelstam and that became doubly true after he wrote the poem “Stalin Epigram” in November 1933. He was arrested and exiled a couple of times, and ended up dying of typhus Dec. 27, 1938, in transit to the Siberian labor camps. 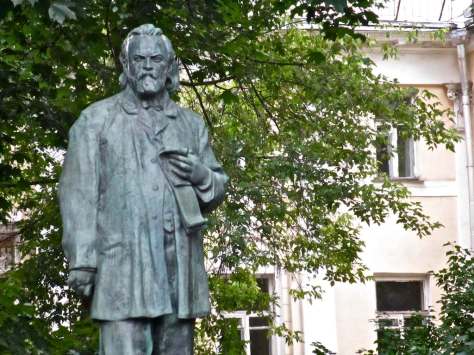 I never paid much attention to Alexander Herzen (1812-1870). Until recently that is. It’s not Tom Stoppard’s Coast of Utopia trilogy about Herzen and his revolutionary friends in London that did it; I actually don’t think much of that piece. But as a radical thinker, a rabble-rouser, a skeptic and an activist, Herzen increasingly comes to mind when I think about the pathetic state of affairs the world has gotten into. The statue of him in Moscow is quite small; a very neat, compact likeness. It is located on Tverskoi Boulevard in the courtyard of the Herzen Literary Institute, right next to the yellow, two-story building in which the future political writer was born, illegitimately, to a young German woman roughly two months before Napoleon invaded Russia. In the last 25 years I have passed by the statue hundreds of times, surely. But I only began to notice it a year or two ago. Thus do world crises affect our ability, or inability, to see. I first photographed it eight to ten months ago (the two shots at the bottom) on a cold, barren, wintry evening while I was on my way to see a show at the neighboring Pushkin Theater. Everything was washed in a thick layer of yellow light. That, and the scraggly trees around him, made Herzen look lonely and distant. Then I photographed him again in June. It was my birthday and I was walking around Moscow shooting all the cultural icons my lens could find. When I came upon the great man this time there was something incredibly joyful and rich and powerful about his presence. The “something” was no strange secret, of course, it was the lush greenery surrounding him that did it. The billowing, cascading leaves made Herzen stand up straight and strong and give me an admirable, hard look. I lingered around him for some time, feeling quite at home in his company. 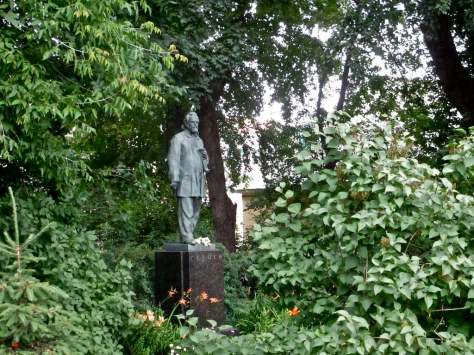 Rather than try to say something I know nothing about, it seems to make sense to turn the rest of this space over to Herzen himself. I brazenly, as my wife likes to say, tracked down some of Herzen’s pithiest comments on the Brainy Quote site. Read on:
1) “It is possible to lead astray an entire generation, to strike it blind, to drive it insane, to direct it towards a false goal. Napoleon proved this.”
Yes, I can’t help but add, we do know our Napoleons!
2) “No one is to blame. It is neither their fault nor ours. It is the misfortune of being born when a whole world is dying.”
Ah! Stab me in the heart, why don’t you?
3) “I am truly horrified by modern man. Such absence of feeling, such narrowness of outlook, such lack of passion and information, such feebleness of thought.”
He keeps racking them up…
4) “All religions have based morality on obedience, that is to say, on voluntary slavery. That is why they have always been more pernicious than any political organization. For the latter makes use of violence, the former – of the corruption of the will.”
5) “There is nothing in the world more stubborn than a corpse: you can hit it, you can knock it to pieces, but you cannot convince it.”
6) “Slavery is the first step towards civilization. In order to develop it is necessary that things should be much better for some and much worse for others, then those who are better off can develop at the expense of others.”
7) “What breadth, what beauty and power of human nature and development there must be in a woman to get over all the palisades, all the fences, within which she is held captive!”
A man after my own heart. Alexander Herzen. 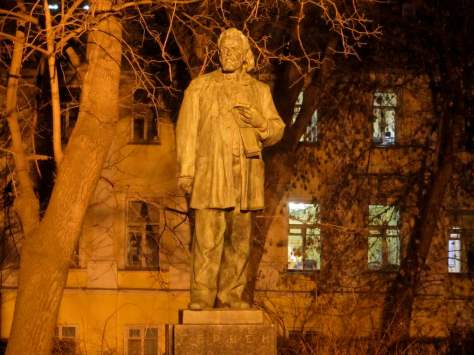 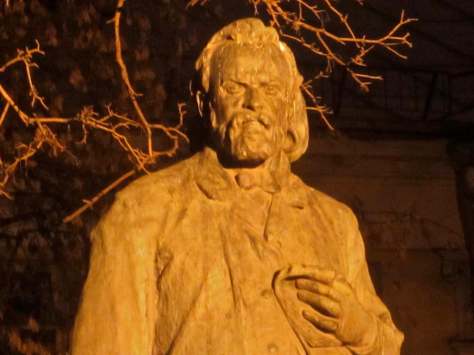