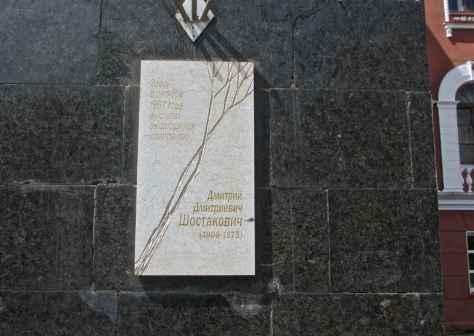 Dmitry Shostakovich made two trips to Voronezh, one in 1933, and another in 1957. It’s an interesting spread in time. When Shostakovich performed at the Spartak cinema house on Dec. 20, 1933, with Vissarion Shebalin, he was still probably something of an unknown outside of musical circles. Among the cognoscenti he was already tabbed as one of the potentially great figures of the future. In any case, at that moment he still saw a cloudless sky stretching out before him. His works were being performed with increasing success in the West and throughout the Soviet Union, he was collaborating with such luminaries as Vsevolod Meyerhold and Vladimir Mayakovsky. It was just over two years later, on Jan. 28, 1936, that the famous “Muddle Instead of Music” attack – provoked by Joseph Stalin – hit him in Pravda, one of the Soviet government’s two main mouthpieces. That came as a response to Shostakovich’s opera Lady Macbeth of Mtsensk, which was written in the two years immediately before the composer visited Voronezh, but premiered (in St. Petersburg) just one month after that visit, on January 22, 1934.
By the time of his 1957 Voronezh concert on Oct. 11, Shostakovich was a veteran of the Soviet culture wars. He had been chewed up, wrung out, spat out and fully embraced  by the government apparatus (one of the worst things that could have happened to him). By this time he had, in other words, two contradictory reputations – one as someone who had run afoul of the authorities and had suffered seriously for it, and another as someone that the authorities had taken under their wing and used as propaganda whenever and wherever they saw fit. It was a nasty place for an artist to be and it – to use that horrible word that Pravda threw at him – has “muddled” his reputation ever since.
The hall which hosted the 1957 concert was, and still is, the Officers House, located at 32 Revolution Prospekt. Shostakovich conducted an orchestra that played his compositions, although I have not determined what those works were specifically.
In my searches I did, however, run across another tidbit of interesting information (that may be an overly strong word) that would appear to be connected to Shostakovich’s appearance in Voronezh. A book titled 40 Songs of V[ano] Muradeli, V[enedikt] Pushkov, and D. Shostakovich, published in Moscow in 1957, showed up at an auction in Voronezh a few years ago. One can’t help but wonder if an extra lot of these books was sent to Voronezh in the hopes that it would sell well during the composer’s visit. Thus it was that the relatively rare book showed up in Voronezh, rather than some other city, many decades later. Just enjoying a bit of speculation here… 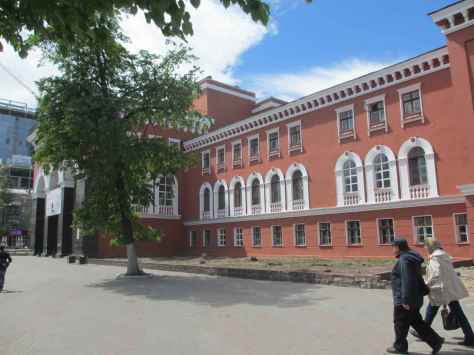 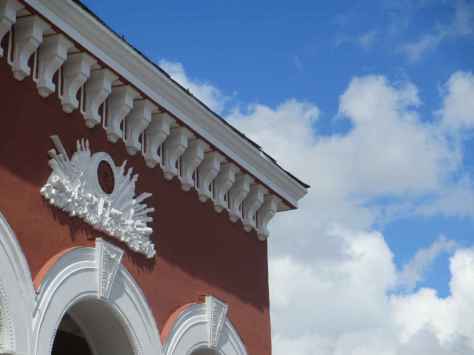 The unveiling of the plaque honoring Shostakovich was a major event for the city, as much thanks to Mstislav Rostropovich as to  the memory of Shostakovich. Rostropovich (about whom I have written several times on this blog – click his name to the left) traveled to Voronezh specially to attend the ceremony. On that occasion, Rostropovich told a local newspaper, “I love Voronezh very much, but from this day on I will love it even more. Because this city has risen in my esteem by unveiling a plaque to a genius. And I am very grateful to you for that, for this was my favorite composer and teacher. Shostakovich came to Voronezh twice. He gave a concert in the auditorium of the Spartak cinema house in 1933, and in October 1957 – at the Officers House. It is right here where the memory of Dmitry Dmitrievich has been memorialized.”
Without quoting Rostropovich verbatim, Vesti.ru reported that the great violist recalled the difficult circumstances in which Shostakovich had to live and work, although he added that the harassment of the Soviet state and the official banning of his concerts never broke Shostakovich’s innovative spirit.
Several people who attended the 1957 concert were present to bear witness on that day, Dec. 11, 2006, when the plaque was revealed to the public. One was Tamara Yurova, a professor at the Voronezh Academy of Arts. “There were not many people in attendance,” Yurova is quoted as saying, “probably because the scope of Dmitry Dmitrievich’s gift and the true scope of his personality, the beauty and depth of his works, were then not obvious even to all musicians. However, the atmosphere was marvelous. The people of Voronezh received Shostakovich warmly.” (This quote combines two different versions that are posted on kommuna.ru and on Vesti.ru.)
I direct those interested in minutiae to the official Voronezh city document that set the unveiling of the plaque in motion, the Resolution No. 2117 of the Head of the City Region of the City of Voronezh, dated Dec. 21, 2005, and officially titled: “On the Mounting of a Memorial Plaque Honoring D.D. Shostakovich.” This document, signed by B.M. Skrynnikov, the Head of the City Region, establishes the place where the plaque shall be hung, what shall be written on it (“The great composer Dmitry Dmitrivich Shostakovich [1906-1975] performed here in October 1957”), and who shall pay for it – the Voronezh region NTV television channel.
For the record, this was still before NTV turned into the blood-sucking, lie-mongering pack of snakes that it has since become… 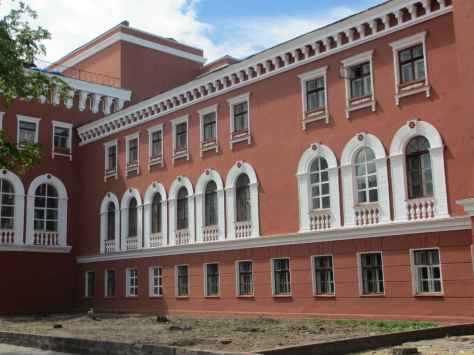