Anybody who skips out of school a little early earns a soft spot in my heart. I did that once, I dropped out of junior college (yes! junior college!) and it was one of the best things I ever did. It’s possible that Nikolai Naumov, the writer from Tomsk, might have said the same thing. True, he didn’t drop out of the Tomsk Men’s (or Boy’s) Gymnasium for the same reasons – orneriness – that I did. He did it because he couldn’t afford to keep his education going.
Naumov, with a full education or not, became a very popular writer of regional and Siberian tales from the 1860s to the 1880s. He never actually set foot in the building that we see in these photos. But it is one of the conventions that we use to connect our disparate times and generations to say, “Naumov studied here.” The name of the place where Naumov studied was the same, and the organization was the same, and so this building at 9 Frunze Street, erected 60 years after the Gymnasium was opened in 1838, still officially represents the school attended by Naumov and many other future prominent Siberians.
Just to keep things in perspective, it wasn’t all famous writers and leading scientists that came through this school. One of its most notorious graduates was Alexander Kvyatkovsky, later to be a member of the group plotting assassinate kill Alexander II in 1879. 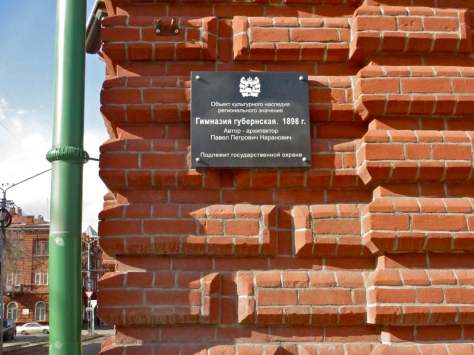 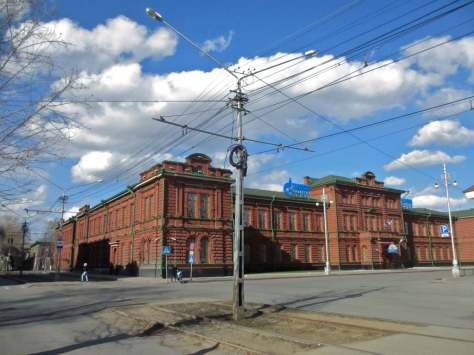 In encyclopedias Nikolai Naumov (1838-1901) is described by that wondrous epithet: Russian writer. We don’t know him today, of course. His tales of life in 19th century Siberian Russia apparently have proven to be too specific, too tied to their own time to reach us. (Although you can access several of his writings through the Lib.ru internet library.) The wonderful illustrated Tomsk guidebook that I always use when I’m in that city, says this about Naumov: “Famous Siberian writer-democrat, one of the first to describe daily life as it was in the Siberian village.” This book’s entry on Naumov continues: “In the ’70s of the 19th century he was one of the most popular writers in the country. He wrote about rural Siberia at the time following the reforms [the abolishment of serfdom], about the way the poverty-stricken local populace was exploited by kulaks [roughly: rich farmers], merchants and bureaucrats.”
A brief biography on the Lib.ru site gives a concise picture of Naumov’s background and early years: “His grandfather was a deacon, his father served in Siberia and moved in the same circles as the Decembrists. He [the father] was noted for his honesty. Losing his mother early in life, Naumov grew up alone, an abandoned child. [What’s that about the fine, upstanding father? – JF] He attended the Tomsk gymnasium, but financial need saw to it that he finished only the first classes. Joining the army as  a junker, in 1860 he audited classes at St. Petersburg University and prepared to take the gymnasium graduate exams, but he became involved in student disturbances and was arrested. Later he became a commissar for peasant affairs in Siberia.”
The same source writes the following about Naumov’s style of writing: “Naumov primarily described the daily life of the Siberian peasant. His vision significantly differed from the cliched image of the downtrodden Russian peasant. [His peasant] was relatively well off and quite able to stand up for himself. Clinging wholly to the school of writers who idealized the people, Naumov saw in the Siberian peasant only the embodiment of various virtues and lofty qualities. If he occasionally described the wild drunkenness of gold seekers, it was exclusively as proof of the Russian individual’s rich and generous nature. Naumov’s drunks never exhibit unruly, insulting behavior, but rather fling money about loosely and allow anyone who would wish to rob them blind. They generously share with every man they meet, and lavishly aid their poorer comrades.”
Naumov’s collected works were published in two volumes in 1897 and in three volumes in 1939-40.