I have always read an unkind cut into a line that Chekhov wrote in The Seagull. You may remember it; it comes as Trigorin, the veteran writer in the play, talks about his place in Russian letters.
“When I die, my friends will pass my grave and say: “Here lies Trigorin. He was a good writer, but he wrote worse than Turgenev.”
This pithy little phrase is the punch line, if you will, of a long monologue in which Trigorin also admits he can’t hold a candle to Tolstoy. But it’s the Turgenev comparison that lives a life of it’s own – a good writer, but worse than Turgenev. Correct me if I’m wrong, but I’ve always read a jab into that “worse than Turgenev.” It’s almost as if Chekhov originally wrote “even worse” but then thought better of it and cut that out. And yet the scribbled-out word continues to show through in the text even today.
I’m making a mountain out of a molehill. I’m probably wrong. But that’s never stopped me before. Being wrong is one of the ways we find out things about the world and ourselves. So I’ll just go along imagining that I can hear – even if I can’t see it – that crossed-out “even” in Trigorin’s little speech.
But enough of that, for we are here today to do honor to Turgenev. And, damn it, it’s rather hard to do! He was a good writer, but he was “worse” than Tolstoy, “worse” than Dostoevsky, his contemporaries. He was not as daring a writer as Mikhail Saltykov-Shchedrin, not as expressive a writer as Alexander Ostrovsky, not as unique as Nikolai Leskov…
Maybe I got up on the wrong side of the bed today. Yesterday I took these photos of a bust honoring Turgenev (1818-1883) and I thought, “What a nice thing that I finally found something honoring Turgenev.” Because one doesn’t really sense his presence in Moscow. Gogol, Tolstoy, even Dostoevsky, who belongs to St. Petersburg, have a good grip on the consciousness of the city. Pushkin – well, Pushkin is everywhere. Turgenev is generally considered to be among that pantheon, but where do you find him if you’re looking for him in Moscow? Аside from a little bust among a dozen others on the facade of the Lenin Library (about which you can read elsewhere on this blog), it’s only here, at the Turgenev Library at 6 Bobrov Lane. And there’s something rather after-thoughtish about this bust and its environs.
It stands in the courtyard of the Turgenev Memorial Library. Sounds wonderful. Except that the original library, built specifically as a library honoring Turgenev in 1885, was levelled by the Moscow authorities in 1972 when they were “improving streets.” It was rebuilt, using old plans, between 1995 and 2004. It’s a nice copy, but it is a copy and so I chose not to include it in this selection of photos. 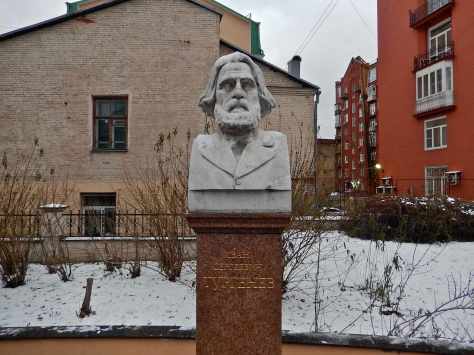 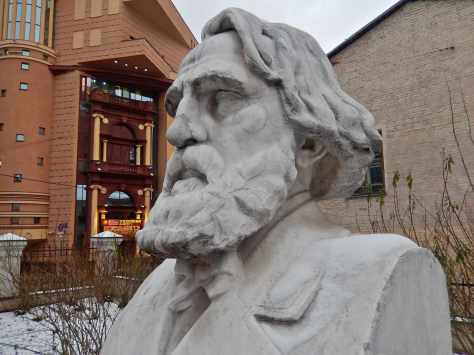 The bust itself is also something of a curiosity. Nowhere on it or on the pedestal does it bear the name of the sculptor. There apparently is a good reason for that, since the image of this marble bust created by Nikolai Kosov is, in fact, a mere copy of a clay bust created earlier by Sergei Konenkov. This clay bust stood for some 30 years inside the library but time took its toll and, even well out of the dangers of Moscow’s severe weather, the clay deteriorated beyond repair. It was then decided to create this marble copy of the original, and to place it where it would be accessible to anyone passing by.
All of this just seems too little and too petty for the man who wrote Fathers and Sons (more correctly, Fathers and Children), The Notes of a Hunter, A Nest of Gentlefolk, Torrents of Spring, the seminal Russian drama A Month in the Country, and much more. This little bust, a copy of a clay original, doesn’t reflect the stature which Gustave Flaubert attributed to Turgenev: “I have considered you a master for a long time. But the more I study you, the more your skill leaves me gaping. I admire the vehement yet restrained quality of your writing, the fellow feeling that extends to the lowest of human creatures and brings landscapes to life.” (That’s pulled from a New York Times review of a publication of the correspondence between Turgenev and Flaubert.) But even there, look at Flaubert’s much sexier, much more explosive comment that the NYT editors pulled up into the title of the review article: “Thank you for making me read Tolstoy’s novel!” (He meant War and Peace, naturally.)
Ai-yai-yai! Does anyone hear a “Gosh, you’re a good writer, you really are, but that Tolstoy, you write worse than him!”
Turgenev, like Trigorin, knew full well what it was like to live in the shadow of those who were greater still.
Then there’s the insult that adds disgrace to injury… Take a close look at Ivan’s nose in these photos. Yes, it’s true. Some nasty, culture-hating street urchin hauled off and gave the marble Turgenev such a whack on the nose that he knocked it clean off. You can see quite clearly where the bust has been repaired.
But by bothering to drag that into my story I have really sunk too low.
Turgenev doesn’t deserve my sarcasm. I am giving free reign today to all that is base and mean in me. Turgenev was the third Russian writer I encountered (following Tolstoy and Dostoevsky, in that order). I read him with… I read him with… I read him with thoughts of, “Mmm, this is nice. I wonder where I can get some more Dostoevsky…” Damn, there I go again. But as the Russians say, you can’t toss words out of a song, and what was is what was. And what did, indeed, take place as I swept through Russian literature in my youth (as it swept through me) is that Tolstoy and Dostoevsky put stakes in my heart. Turgenev was nice. Very nice. And then Gogol and Pushkin put me flat on my back. Those are the words of that song, and it’s the only way to sing it.
It’s a whole other thing that I, and maybe not only I, could use a rediscovery of Turgenev. Maybe I’m not seeing him, like Muscovites can hardly see him. Maybe I’m blinded and prejudiced and ignorant and confused. If so, all I can say is: Bring on enlightenment. I’m ready.
Finally, I ran across a piece hanging around in the internet for over two years that indicates there have been conversations about erecting another, more prominent, monument to Turgenev in Moscow. This would be outside the house on Ostozhenka where the writer’s mother lived in the 1840s and 1850s. It is now a Turgenev museum, an affiliate (hear that?! hear that?!) of the Pushkin Museum. Anyway, as far as I know, nothing has ever been done about actually making the proposed monument a reality. Maybe everybody just got bored and fell asleep after bringing the topic up…
Slap my hands! Slap my hands! 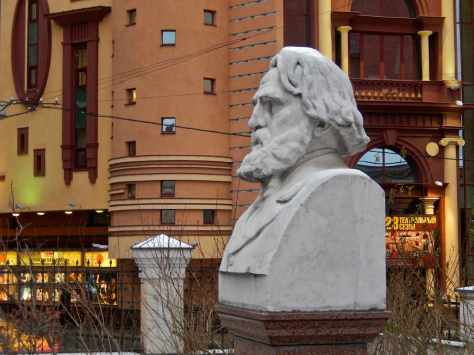