If you happen lose yourself in your thoughts as you walk down the main drag in Voronezh you might be excused for thinking at a certain moment that you had taken a wrong turn and wound up in some Mediterranean or even Caribbean resort. That would happen as you look up at the three-story building at 42/44 Revolution Prospect (formerly Bolshaya Dvoryanskaya [Grand Nobility] Street). It’s a beautiful, happy structure with lovely, earthy colors, hispanic-looking mosaics, seemingly non-functional towers, and lacy window frames that look like they could be anywhere but in the middle of Russia. This is the former Central Hotel, where, after it was built in the early 1880s, most everybody who was anybody stayed when they were in town. As the plaque on the street-side wall proclaims, the writers Gleb Uspensky, Anton Chekhov and Vladimir Mayakovsky all checked in here at one time or another. I can’t find much about Uspensky’s visit. Even a website devoted to the plaque itself provides no more information that the fact that he “lived here in February 1890.” End of that story, at least for now. Chances are he was here while traveling around the country collecting material for his essays and stories on Russian life. Elsewhere on this blog I write a little about his short stay in a hotel in Tomsk in the summer of 1888. Chekhov showed up with his friend and publisher Alexei Suvorin in tow in February of 1892. They spent five days here while on business in connection with Chekhov’s charity work. Based on letters published in that spectacular, blue, 30-volume collected works that every Russianist owns or wants to own, Chekhov arrived on February 3 and departed on the 7th. He was always active in fighting famines and epidemics. According to Russian Wikipedia, the Famine of Fall 1891 to Summer 1892 involved most of the so-called Black Earth and Central Volga areas of the country. It was kicked off by a bad harvest in the spring of 1891, and it quickly turned into a catastrophe, destroying the local economy and setting off problems with typhus and cholera. This, of course, is where Doctor Chekhov came in. He, along with another doctor-writer Vikenty Veresaev, were instrumental in getting help and medicine to the afflicted. Chekhov’s experience with this famine/epidemic found reflection in his story “The Wife,” published the same year that he was in Voronezh. The first note written by Chekhov on Feb. 3 is to local resident Grigory Lepnev. In it he states he will depart the next day for a trip around the region, but it didn’t happen as soon as the good doctor expected. On Feb. 6, he wrote to Yefgraf Yegorov, a retired officer in the Nizhgorod area, “The same thing happened that happened in Nizhny, which is to say, the governor invited me to dine and I had to speak, and listen to, much about the famine… Voronezh is filled with activity. The battle with the famine here is set much better than in the Nizhgorod region. They aren’t only giving out bread here, but also transportable stoves and coal. There are workshops set up and many cafeterias. Yesterday there was a benefit for famine victims at the theater – the house was full.” Chekhov’s father and paternal grandfather, incidentally, were born in the Voronezh area. They famously were serfs there in the household of Alexander Chertkov, a well-known archaeologist, historian, book collector and publisher. 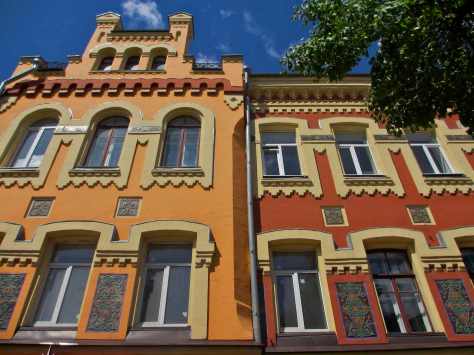 Mayakovsky appeared in Voronezh on the morning of November 22, 1926. Thanks to a detailed description of his visit on the Communa website, we know that nobody met him at the train station and he made his own way to the hotel, where he met with Nina Logofet, a member of the local Black Earth writers group. She, apparently, was in charge of his schedule during his stay. That evening he appeared at a reading at the theater – I don’t know which one specifically. Mayakovsky delivered a talk called “My Discovery of America,” then spent “several hours in the company of his fans.” He did not return to his hotel room until dawn. Thanks to this meeting, the local poets Logofet and Vladimir Korablinov were soon published in Moscow in the literary journal New LEF. Mayakovsky promised them he would publish their work and he kept his promise. On November 25 the first public account of Mayakovsky’s visit appeared in the newspaper Voronezh Commune. It was written by the poet Ivan Belyaev, a huge fan of Mayakovsky’s who recently had come to Voronezh from Estonia. For the record, Belyayev had less than a year to live at this point – he was arrested in the summer of 1927 and sent to prison in Moscow, where he perished. Mayakovsky himself was almost on borrowed time by now – he shot himself on April 30, 1930, in Moscow. That sad deed occurred in a building I have written about elsewhere on this blog site. You can hear Mayakovsky himself read his poetry by going to the very cool openculture website, which has two audio links to Mayakovsky reading his own work, as well as a link to a video of the 1918 film The Lady and the Hooligan, in which you can see Mayakovsky act. In the final photo below you can see an old photograph of the hotel taken, I assume, at around the turn of the century. It looks very much like it does today, aside from the garish advertisements on the street level. I took the photo of the photo in a marvelous basement cafe in the old building. 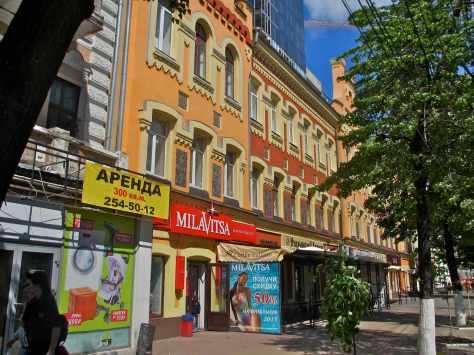 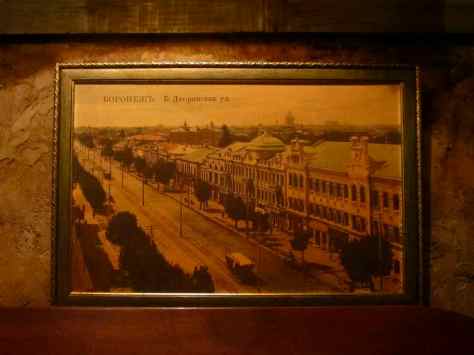