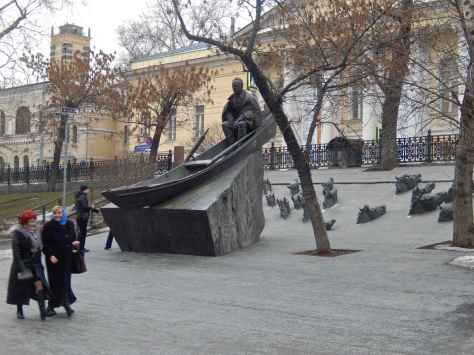 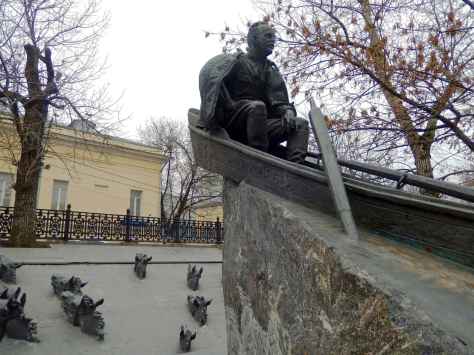 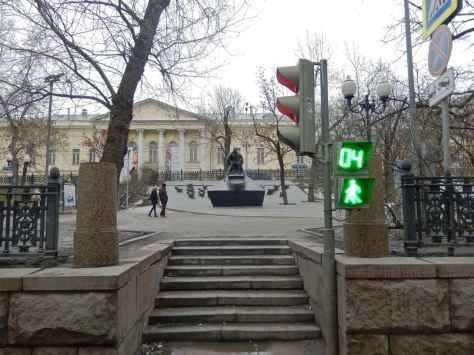 I have been photographing this monument to Mikhail Sholokhov, the Nobel Prize-winning author who claimed to have written the classic Soviet novel The Quiet Don, for several years now. I have never liked the photos I got. Often it was a problem of light – I usually happened upon it on very sunny days when I got nothing but black shadows and burned-out white spots. But there were other problems, too. One is the monument, which is sprawling and multifarious and, therefore, difficult to get an angle on. Another is the figure of Sholokhov. Controversial is no longer the word for him – it now seems certain that many will continue forever to call him a fraud -still another of those frauds, like the Stakhanovite shock workers or the child hero Pavel Morozov, none of whom actually existed, at least as the stories were told about them. Sholokhov may well have been one of those heroes that the Soviet state needed, but didn’t have, so chose to make up. And he turned out to be willing to play the part – why not? –  it made him rich, famous and powerful. Rumors, and not only rumors, have long posited that a certain Fyodor Kryukov, a soldier who was killed during the Russian Civil War, wrote most of The Quiet Don (English publishers traditionally have cut this work into two, And Quiet Flows the Don, and The Don Flows Home to the Sea). Over the decades other authors, or partial authors, have been put forward, including Alexander Serafimovich (who denied he wrote the novel). The 1999 discovery of the manuscript that Sholokhov first submitted for publication at the end of the 1920s gave support to those who believe in Sholokhov’s authorship. It was clearly determined that 605 of the 885 pages were written by Sholokhov, while the remaining pages were written by his wife and her sisters.
And yet, the doubt that hangs over Sholokhov’s head is just too serious to be dismissed. After all, who is to say that Sholokhov and his wife didn’t merely copy out Kryukov’s, or someone else’s, abandoned text? A highly detailed article about the controversy on Russian Wikipedia lists 17 serious accusations that have never been successfully refuted. It lists 10 detailed reasons to believe that Sholokhov wrote the novel.
I am no expert in this topic, which, as the Russians say, could easily make the Devil himself break a leg trying to maneuver the details. I did have the memorable, though, ultimately inconsequential, experience of once working with a TV producer who came from the Don region, knew the people there, the stories, the reality, and who passionately, even vehemently, supported the version that Sholokhov was a plagiarist.
Sholokhov was recently in the news again when the archives of the Nobel Prize Committee for 1965 – the year he won – were made public. You can read some details in an article in The Guardian, but here are a few tidbits: Writers passed over in favor of Sholokhov included Vladimir Nabokov, Anna Akhmatova, Konstantin Paustovsky, Pablo Neruda, Jorge Luis Borges, Somerset Maugham, Samuel Beckett and several others. Although records show that the choice of Sholokhov was unanimous, it was, according to a piece published by Colta.ru, far more controversial than it would appear at first blush. At one point a suggestion to give the Prize jointly to Sholokhov and Akhmatova appeared to gain traction. It was apparently shot down by Professor Anders Esterling, who declared, with some reason, that such an award would be pointless since nothing, other than their native tongue of Russian, unified the two writers. 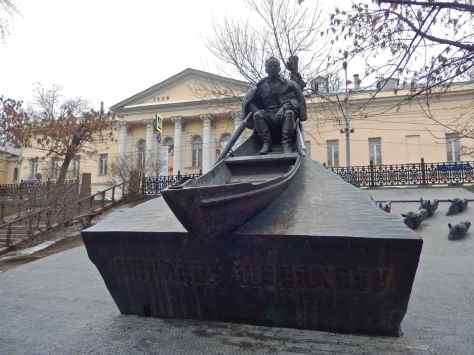 This monument, conceived by Iulian Rukavishnikov several decades ago, but eventually created by his son Alexander Rukavishnikov, and unveiled May 24, 2007, was the second monument honoring Sholokhov to be erected in Moscow. It has been – like its subject – controversial from the very start. It is located in the garden walk area of Gogol Boulvard immediately across from house No. 10, where Ivan Turgenev occasionally lived. Many felt that if any monument were to go up here, it should have been one honoring Turgenev. This is not, however, a fully arbitrary location for the present sculptural group, as Sholokhov lived for many years on Sivtsev-Vrazhek Lane, which runs perpendicular to Gogol Boulevard right in front of the monument. Sholokhov, sitting in a boat presumably navigating the Don River, looks directly down the street where he lived. Behind him is a fountain – which doesn’t always have water flowing in it, and certainly did not on the sub-freezing day I photographed it – that shows horses fording the river in the opposite direction from Sholokhov (who appears to be letting the boat float where it will as he poses for the sculptor). Across the walkway there is a two-sided bench, the backs of which bear symbolic images important to the Cossacks, the main characters in The Quiet Don (such as sabres and the Russian symbol of the two-headed eagle). Scattered around in the walkway around the benches are bronze imitations of stray sheets of manuscripts. The one I provide here (the second-to-last photo below) is of the title page from Sholokhov’s other famous novel, They Fought for their Motherland. You can’t help but wonder if this is the sculptor’s sly idea of a way to acknowledge the legend that Sholokhov came upon “his” Quiet Don as an abandoned manuscript. 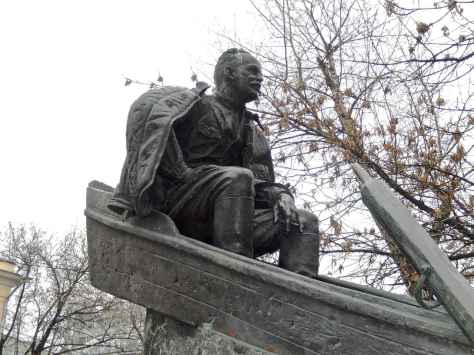 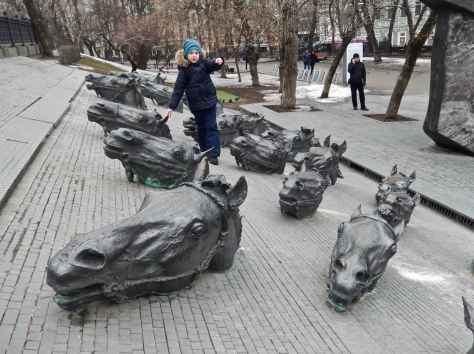