My wife and I happened to drive through Zvenigorod a few weeks ago, and who should I see when we stopped to make a left turn, but Lyubov Orlova. I’m probably the last person – in Russia, at least – who did not now that the popular actress, the Soviet Union’s first sex symbol, was born in Zvenigorod, a sleepy little town due west of Moscow. The statue is relatively new – it was unveiled September 10, 2016. To be entirely honest, I can’t say I’m much of a fan. Sculptor Alexander Rozhnikov seems to have conjured all the kitsch he could muster. It doesn’t help that the square on which the statue is located is terribly nondescript. Bits and pieces of Zvenigorod have the feel of a cozy old Russian town, but not the area that is dominated by the Lyubov Orlova Cultural Center. That building – the creme colored structure behind the statue – is as faceless as everything else on this block. As for the statue, it shows Orlova in a “typical” glamour shot – one hand behind the back of her head, the other saucily planted on her left hip. Presumably the image is inspired by Orlova’s performance in her first major film – Jolly Fellows (1934). In any case, in that film she wore a similar top hat with a feather on the left-hand side, as you see in the photos of the sculpture here. I have to take issue with my old friend Nonna Golikova, Orlova’s great-niece, who said at the unveiling that the dress made of film reels “is a very precise metaphor, wonderful!” I’m more inclined to say that the dress flowing down into rolls of film is about as cliched as one could get. As for Orlova’s face, is it generic or is it completely lacking in character? Sorry folks, I just can’t get behind this one at all.
Having said that, I have to admit it was a thrill to run across something like this in a small Russian town. The Orlova Cultural Center tells us that this is the first and the only statue honoring Orlova in Russia.
Orlova was born on the summer estate belonging to her mother Yevgenia Sukhotina in Zvenigorod in 1902 – February 11 according to the Grigorian calendar, January 29 by the Julian calendar, which was in effect in Russia at that time. Both her mother and her father Pyotr Orlov were from noble families. They were sufficiently well-known and well-placed in society that Fyodor Chaliapin was a frequent family guest in Zvenigorod when Orlova was a girl. According to legend, she once performed in a children’s production at Chaliapin’s home in Moscow, making an indelible impression on the great singer. Here is the account of that great event from the Lyubov Orlova website.
“At his Moscow home on Novinsky Boulevard Fyodor Ivanovich Chaliapin often organized holidays for children. Sometimes they staged children’s plays. Lyubochka Orlova participated in one of these productions, the musical fairy tale Mushroom Trouble. She was then no more than six years old. The performance was carefully prepared, rehearsals were conducted, the little performers were outfitted in fine costumes. The production was prepared by two directors: Chaliapin’s wife Ilya Ilyaevna and Alexander Adashev, an actor of the Moscow Art Theater. Lyubochka performed the role of the Turnip, and her singing and dancing charmed the audience. Following the performance, Chaliapin picked the girl up in her magnificent pink dress and shouted: ‘This girl will be a famous actress!“‘

Be that as it may, Orlova’s parents were not convinced that their daughter’s future lay in acting, and they sent her to the Moscow Conservatory in 1919 where she studied piano for three years. She did not complete her education there, however. Some sources say that her musical ear was damaged due to an illness and she could not continue, while others suggest that the hard times hitting Russia in 1922 forced her to go out into the world and earn a living. She did, however, switch over to what we now know as GITIS (the state theater institute) to complete her education. Upon graduating from GITIS Orlova joined the company of the Moscow Art Theater strictly as a dancer in the corps de ballet. From 1920 to 1926 she earned extra cash by accompanying silent films at various Moscow cinemas as a pianist. Apparently the one she most often played at was the Ars cinema on Tverskaya Street. It so happens that I now work for the theater – the Stanislavsky Electrotheatre – that is located in that very space. Orlova was famously discovered by the filmmaker Grigory Alexandrov in 1933, and he cast her in Jolly Fellows, his first full-length film, making both of them overnight legends. They were married that same year and remained together until Orlova’s death in 1975.
The Orlova family, in addition to counting Chaliapin among their friends, were also related to Leo Tolstoy by way of Orlova’s mother’s family. Orlova’s great-Uncle Mikhail Sukhotin married Tolstoy’s daughter Tatyana in 1899. Supposedly, Orlova would bounce on Leo’s knee when he came to visit. She owned a copy of Tolstoy’s The Prisoner of the Caucasus, which he signed and presented to her, although it’s possible that she herself had little to do with that gift. One can find a story which states that Orlova’s mother actually wrote to Tolstoy asking him to send her daughter the gift. According to this source, “The fact is that her mother was an incredibly vain woman who composed family legends and did shocking things on behalf of her daughters.” Still, we are inclined to take Orlova’s own account into consideration. This is what she wrote about the gift in 1945. “One day my mother let me read Tolstoy’s children’s stories. I liked them very much, and I asked her to give me another book. Mother did not have anything more like it. So I said I would write to Grandpa Tolstoy and ask him to send me another book. Mother laughed, but let me do it, and I wrote the following: ‘Dear Grandfather Tolstoy! I read your book. I liked it very much. Please send me another of your books to read.’ Responding to this child’s request, the great writer sent as a gift the book The Prisoner of the Caucasus with the inscription, ‘To Lyubochka – L. Tolstoy.’ 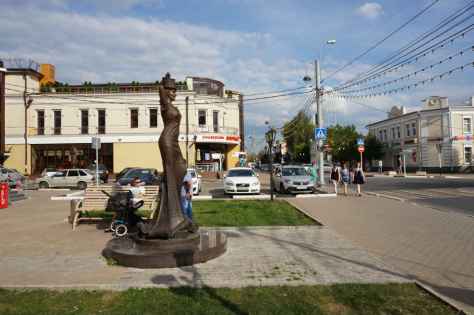 Let the debates begin!
Are these dachshunds, bassets, badger-dogs, badgerers or turnspits? Frankly, they look like what I called a wiener dog when I was a kid. You can also find “sausage dog” in dictionaries, although, to my mind, that’s not as fun, or as funny, as wiener dog. I’ve seen people nearly come to blows discussing what species of dog these guys might be. I can’t get worked up enough to join the argument.
These pups here are named Brom and Khina (or, more likely, from left, Khina and Brom – see the text after the jump). They belong to the guy who set his hat down on the rock, and that guy, in the grand conception of sculptor Alexander Rozhnikov, is Anton Chekhov. These sculptured pooches, you see, represent real dogs that Anton Chekhov owned when he lived at his suburban Moscow estate of Melikhovo. (You can see the estate’s kitchen and servants’ quarters in the distance through the trees in the two photos immediately below.) Rogozhin’s idea was that Anton was out for a walk with his little friends and found an apple somewhere, picked it up, put it in his hat and then, for reasons that neither art nor history will ever explain for all of eternity, he stepped away and left the dogs alone for a moment. “As such,” Rozhnikov is quoted as saying on a descriptive tablet near the sculpture, “although Chekhov himself is not present in the sculptural composition, his spirit hovers unseen nearby.”
Chekhov’s dogs were the offspring of two other literary canines, Dinka and Pip, who belonged to the St. Petersburg-based playwright, short-story writer and editor Nikolai Leikin. Leikin was Chekhov’s editor for some time at Shards magazine, and the two were good friends. When he – Chekhov – realized his longtime dream of acquiring an estate with land, he promptly set about bringing to fruition another dream: that of owning some pedigreed dogs. He acquired two of Dinka’s and Pip’s pups, transported them to Moscow, and then out to Melikhovo. This would have been in the spring of 1893. According to that informational tablet near the sculpture (let’s be honest, I’m pulling 95% of my info from it today), the dogs immediately took over the rule of the roost. They “barked at the servants, dragged galoshes all over the house, dug up all the flower boxes, and struck fear into the hearts of all the mutts running around the property. Those mutts had never seen such strange dogs.” 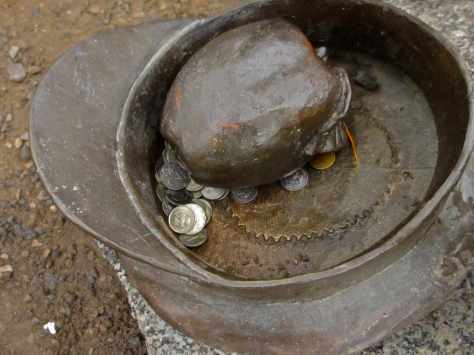 The dogs received their names from Chekhov’s sister Maria, who chose to name them after substances that could be found in Doctor Chekhov’s medicine bag. Brom = bromide; khina = Jesuit’s bark. Apparently as the dogs grew older Chekhov felt it necessary to address them in a more formal manner, and he added patronymics to their names. Thus they became known around Melikhovo as Khina Markovna (Khina, daughter of Mark) and Brom Isaevich (Brom, son of Isiah).
And now let me stop pretending that I am actually writing this post. Better, I think, simply to quote what is left of the text on the tablet.

Chekhov informed Leikin that, “The dachshunds Brom and Khina are well. The former is dexterous and lithe, polite and sensitive. The latter is clumsy, fat, lazy and sly… They both love to weep from an excess of feelings.”
The writer was very partial to his dachshunds. They followed him everywhere, were funny and punctilious. They were allowed to sleep in Anton Pavlovich’s room; he loved having long conversations with them and he staged hilarious homemade plays [with them]. Mikhail Pavlovich, the youngest of the Chekhov brothers, recalled:
“Brom and Khina were dachshunds, blackish and reddish, while Khina had such short legs that her belly nearly dragged on the ground. Every evening Khina would come up to Anton Pavlovich, put her front paws on his knees and pitifully and loyally stare him in the eyes. He would change his facial expression and, in a shaky, old-man’s voice, would say:
‘Khina Markovna! You poor thing! You should go to the hospital! You would feel better then, yes you would.’
He would spend an entire half hour talking to his dog, thus keeping everyone in the house in stitches. Then it would be Brom’s turn.”
The sculpture of Khina and Brom was unveiled December 22, 2012 and a new tradition began immediately. People rub the dogs’ noses to make their wishes come true. Now Chekhov’s touching and comical dachshunds greet all visitors to the museum at Melikhovo. Gazing at their thoughtful little mugs, one can’t help but remember Chekhov’s words: “crooked paws, long torsos, but uncommonly smart.”

Special readers please note the date that this sculpture was unveiled. If you are one of the special readers, you will recognize this post as a slightly early birthday wish.