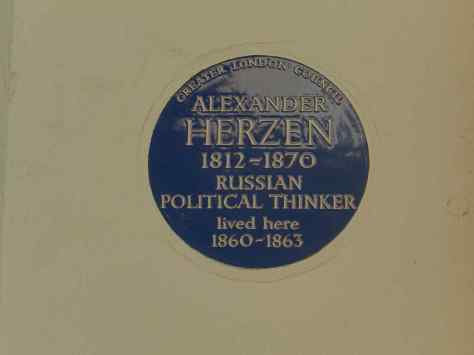 Of all the places I could be today (save Chania, Crete), I think I would choose London. Maybe it’s the old blood burbling up in whatever is in me of my mother’s line. Maybe it’s because I seem to have the extraordinarily good luck of invariably hitting London when spectacular weather reigns supreme. Maybe it’s because the city is just so damn beautiful, I can never devour it enough with my eyes. So, it’s to London we go today.
London has been the choice of many a good (and shady) Russian over the centuries. I don’t give a hoot about the sold souls who own football teams and sell colleagues into prison or worse. My gaze is a bit more fastidious. Surely one of the most famous Russian residents of London was Alexander Herzen (1812-1870), who lived in the British capital from 1852 until 1864. I have written several times already about him and specific places connected with his name and work in both Moscow and London. He is a man who left his mark, and left it in a way that has made people want to remember him. One of the great liberal or even radical Russian thinkers, Herzen’s name stands for revolution, for freedom and for equality. Most of all, perhaps, it stands for bucking the status quo. He had a quick, insightful mind and a talent for words that made him a focal point of most any society he found himself in. That is certainly true of his time in London, where he produced important revolutionary writings of his own, published an important newspaper (Kolokol, or, The Bell) and ran an important publisher (the Russian Free Press, which I will get to someday in this space). He spent some of his time in London in close contact with his great friend and romantic rival, the poet Nikolai Ogaryov (see elsewhere on this blog site), the anarchist Mikhail Bakunin, and many others. In her wonderful, all-too-brief series of blogs about Russians in London, Sarah J. Young provides this list of Herzen’s visitors: Ivan Turgenev, Nikolai Chernyshevsky, Leo Tolstoy, Fyodor Dostoevsky, Nikolai Nekrasov, Pavel Annenkov, the critic and translator Vasily Botkin and the leftist writer Vasily Sleptsov. She adds: “It’s certainly true to say that neither his closest friend Nikolai Ogarev nor Bakunin would have ended up in London if Herzen hadn’t been here.”
The building we peruse today is a lovely piece of architecture, still in excellent condition. You walk up to the door of One Orsett Terrace in Westminster and you can fully imagine what that very experience would have been like for Turgenev, for Dostoevsky, for Tolstoy as they came by for an evening’s visit. It really makes you want to lift that heavy brass, lion-headed knocker and let it whack a couple of times. I actually fought back my desires to do that because – well, do you know how easy it is to become the stupid American tourist? Imagine someone answering my knock and I, covering my disappointment, saying, “I was hoping Herzen might open up. Who are you?” Or something like that. So I left that experience to my imagination – which could well be why it still affects me so viscerally when I see that brass lion’s head in my photos. Anyway, Tolstoy would have come by here in March of 1861. The indispensable Sarah J. Young writes: “Tolstoy arrived in London on 2nd March 1861, and left on 17th. He had not met Herzen before, but it is known that they saw each other regularly during the sixteen days of Tolstoy’s stay.  Lucas (p. 33) describes Herzen’s daughter Natalya’s recollections of seeing Tolstoy, whom she knew as the author of Childhood, at Orsett House, Westbourne Terrace. He states that Natalya was disappointed that Tolstoy wasn’t the heroic figure she was expecting, but he doesn’t give a source for the scene. Lucas also quotes Herzen as saying ‘I am seeing a great deal of Tolstoy. We have quarrelled. He is stubborn and talks nonsense, but is naive and a good man’, from Aylmer Maude, Family Views of Tolstoy (p. 71).”
(It is thanks to this specific post of Young’s that I hunted down and found this place to photograph.)

Dostoevsky would have been here a little over a year later. Again, I turn things over to Young, for there is no point in pretending I know more than she does: Dostoevsky “visited London for 8 days – his only trip to Britain – arriving on 9th July [1862]  (Dryzhakov, p. 328). Like many other writers, one of his chief aims was to see Herzen, and he certainly did so on 16th July, as well as probably also on Sunday 11th. According to [Joseph] Frank, the two men, who found they had a great deal more in common than they had on their previous meeting, in 1846, discussed recent events: Chernyshevsky’s arrest, the spate of fires that had engulfed Petersburg that spring, and the revolutionary Young Russia proclamation that had been published to much furore in May (Frank, pp. 145-59, 188-92). Given the closeness of Herzen’s circle, and his habit of entertaining on Sundays at Orsett House, it seems likely that on 11th July, Dostoevsky also met Bakunin and Ogarev.”
Turgenev, who was a frequent traveler to London and the U.K. in general, met often with Herzen. How frequently he came to this specific house, however, is less certain. Young, God bless her, tells us this (she begins with a reference to a passage in Patrick Waddington’s Turgenev and England and then clarifies): “…in May 1862, when Turgenev finally arrived with the writer Vasily Botkin after many delays, there was no room for him at the Herzen residence on Westbourne Terrace and ‘he had to stay with neighbours, possibly in the very house where Michael Bakunin was now living’. But we know that Bakunin was by this time living at 10 Paddington Green, which by no stretch of the imagination could be described as neighbouring Orsett House. A rift with Bakunin marked the end of Turgenev’s visits to this most famous group of Russian exiles….”
It is also worth quoting a section from Leonard Schapiro’s book Turgenev: His Life and Times (pp. 195-196): “On his short visit to London, Turgenev had engaged in lengthy argument with Herzen on the nature and future of Russian society. The result of this debate was a series of eight articles by Herzen, entitled ‘Ends and Beginnings,’ cast in the form of open letters to a friend, published in the Bell in the second half of 1862. Turgenev originally intended to print his reply in the same journal, but in consequence of a general warning from the Russian authorities not to write for that paper, thought better of it. Turgenev’s views in the debate therefore appear in his private letters to Herzen of the period, and in summaries of his arguments incorporated in Herzen’s articles. Herzen’s open letters, written with the brilliance and exuberance which characterized his style at its best, expound a theme which is familiar enough in his writings – that Western civilization has reached the end of its creative potential, and is destined to sink into the slough of vulgar, bourgeois self-satisfaction.”
Well, I guess it’s good to see that Western civilization is still dying – for, surely, it is doing that these days. I am less happy to see that Turgenev did what so many of my contemporaries now do – agree to self-censorship when confronted by the authorities. But what is eternal is eternal, I guess.
Finally, Schapiro’s comments allow us to say that Herzen’s “Ends and Beginnings” were surely written right here in the home you see pictured today. 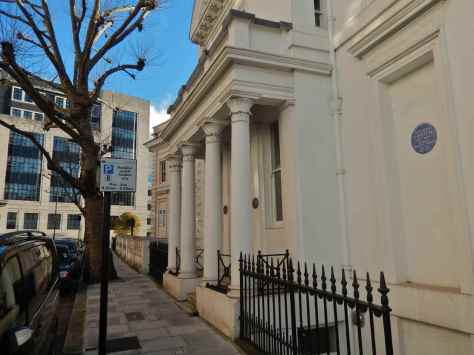