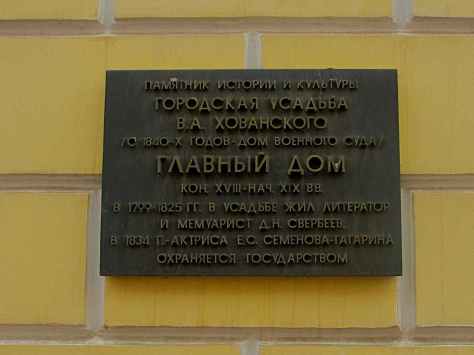 This house at 37/1 Arbat is a throwback to another age. It was built in the late 18th century – the oldest remaining building on the Arbat – and, after damage suffered in the fires associated with the Napoleonic War of 1812, it was reconstructed. What we see today is the result of work done in 1834. Quite a few people of note have lived in or visited this home. Today we’re interested primarily in Dmitry Sverbeev (1799-1874), who was born here,  and Yekaterina Semyonova (1786-1849) who lived here for a time from 1834 to 1835.
Sverbeev was a diplomat who loved literature and writers and befriended many of them. He described his own interest as such: “I sometimes love to read a bit and listen to intelligent conversations.” He knew Alexander Pushkin and appeared to be rather close to Nikolai Gogol, which is a little bit like a tiny planet orbiting two super-suns. Sverbeev spent a good deal of time with Gogol abroad and, when the writer found himself in financial difficulties, the friend generously gave him money to keep going on. (Sverbeev in general seems to have been a generous man, often helping out people who were not as well-situated as he. In a stroke that says much about him as a person, he never wrote about any of this in his memoirs.) Sverbeev was not as close to Pushkin as he was to Gogol, although the poet did attend Sverbeev’s salons in Moscow in the 1830s, and they crossed paths in various places for many years.
Interestingly, one story from Sverbeev’s memoirs, My Notes (written in retirement in Switzerland and never intended for publication), involves Pushkin and Semyonova, a famed actress who counted Pushkin among her admirers.
In 1820 when Pushkin was visiting the theatres in Moscow, he attended a performance of Semyonova and caused a bit of a ruckus. I’ll let the Prometheus website finish the tale: “Pushkin brought to the theatre a portrait of the French artisan Louvel, who had recently been executed for assassinating in Paris the Duc de Berry, an heir to the throne. The portrait bore a  sweeping inscription: “A Lesson to Tsars.” After the first act, the portrait was passed around the rows of the theatre. Incidentally, it is precisely Dmitry Sverbeev who tells us about this incident from the life of the poet.”
There is some slight confusion about the actual years Sverbeev spent at this house on the Arbat. At least I don’t find hard evidence of the date he left for good. The plaque on the building facade states he lived here from 1799 to 1825, but I haven’t been able to corroborate that. What I do find is that he was posted to the Russian embassy in Geneva in 1824. What exactly he did in the immediately preceding years, I do not know (he graduated from Moscow University in 1817). I’m guessing that the famous literary salons that he hosted were not begun until he left the Arbat, even though the Prometheus site claims he “organized a circle in his own home on the Arbat.” It is known that his most famous salon gatherings were held when he lived at 10 Strastnoi Boulevard and later at 25 Tverskoi Boulevard (I’ve written about this location previously as one of Osip Mandelstam’s addresses in the early 20th century.)

Semyonova is one of those shooting stars that history tosses up every now and then. She was an uneducated, apparently illiterate peasant who, thanks to her fiery temperament, became one of St. Petersburg’s and Moscow’s most popular actresses of her time. She particularly shone in the romantic dramas and tragedies of Vladislav Ozerov, himself a huge star playwright whose fantastic popularity died utterly within just years. He had the misfortune of being a pre-Pushkinian writer, and was soon wiped from the memory of his countrymen. (You will see Pushkin do a bit of the wiping himself in a long quote offered shortly below.) Nobody has performed Ozerov plays for decades, if not centuries. Be that as it may, four of Semyonova’s first six major roles were in plays by Ozerov (stress on the first syllable) – Oedipus in Athens (1804), Fingal (1805), Dmitry Donskoi (1807) and Polyxena (1809). She also shined in Yakov Knyazhnin’s Rosslav (1805) and several foreign plays: Friedrich Schiller’s Maria Stuart (1809), Corneille’s Ariana (1811) and Racine’s Iphigenie (1815). She debuted in 1802 and joined the company of the Alexandrinsky Theater in 1805.
As I have mentioned, Pushkin was a huge fan and in a long defense of Semyonova (whom some in St. Petersburg compared unfavorably to the popular French actress known as Mademoiselle Georges), he wrote:
“Speaking of Russian tragedy you speak of Semyonova, and, perhaps, only about her. Gifted with talent, beauty and a lively, true temperament, she came into being all on her own. Semyonova never had a model. The soulless French actress Georges and the eternally enthusiastic poet [Nikolai] Gnedich could only hint at the secrets of art which she understood as a revelation of her soul. Her performances are always unencumbered, always clear, with noble, lively movement, her voice is clean, smooth, pleasant and often reveals gusts of true inspiration – all these belong to her alone and are not borrowed from anyone. She decorated the imperfect creations of the sad Ozerov, creating the roles of Antigone and Moine; She animated the pedestrian lines of Lobanov; In her mouth we appreciated the Slavonic verses of Katenin, full of strength and fire, but lacking in taste and harmony. In colorful anonymous translations which, unfortunately, today are much too ordinary, we heard nothing but Semyonova. The actress’s genius gave stage life to all these lamentable works translated by allied teams of poets, where each of them individually renounced his participation. Semyonova has no rival; The occasional gossip, brief battles and invented hearsay have ceased; She remains the unanimous queen of the tragic stage.”
Pushkin so admired Semyonova that he mentioned her in his great novel-in-verse Eugene Onegin. Celebrating his young years when he frequented the theatre, Pushkin in Chapter 1, stanza 28, wrote: “There Ozerov shared the involuntary tribute / of people’s tears and applause / with the young Semyonova.”
Depending upon the source, you can read all kinds of probable nonsense about Semyonova; what a hothead she was, how ignorant she was, how lazy she was, how covetous she was… You can always read things like that about popular, to say nothing of great, actors. I think Pushkin’s characterizations beat the hell out of all the snippers, snappers and snipers combined. I just have a feeling (say I with no small sarcasm).
In any case, Semyonova’s career took a downturn in the years 1815 to 1820 and from then on she performed less and with less success. She moved to Moscow in 1827 and the following year married Count Ivan Gagarin, the man who had been her lover and had given her several children. It wasn’t the happiest of arrangements, but it became worse after his death in 1832. At least as late as 1830, Pushkin is said to have attended her performance in an amateur production in Moscow, but it was a far cry from her glory days. By the time Semyonova lived briefly on the Arbat, her acting days were effectively behind her. 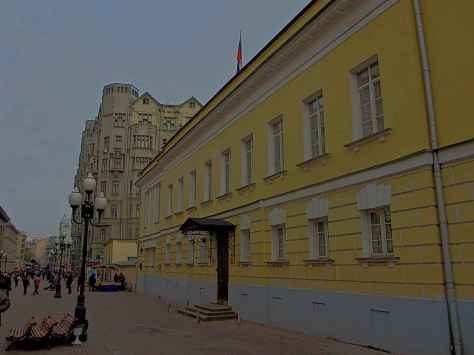 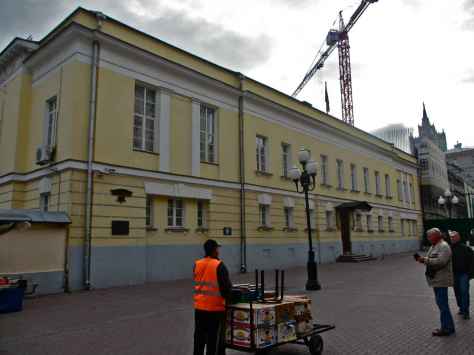