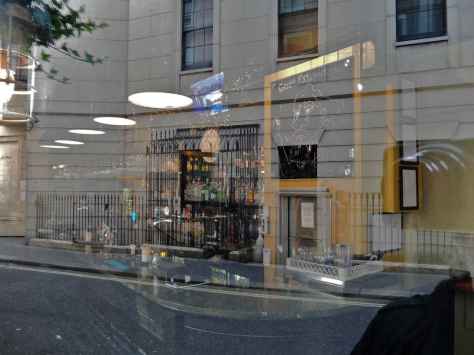 Oh, watch out for those slippery vermin – thieves, crooks and shysters! This pub at 51-52 Chandos Place in London knows of what it speaks. Over the 500 years of its “chequered” existence, as the sign outside the entrance puts it, it has known all manners of greatness and perfidy. Its original owner was a mistress of the Duke of Buckingham. It was a thieves’ den, the original Hole in the Wall. And it was a place frequented by Charles Dickens.
What has Fyodor Dostoevsky to do with this? Well, nothing, actually. Nothing at all. Nothing of any kind. Unless you are inclined to be a fan of fantasy and hoaxes. And even then, I am the one making up this possible connection in a place that in no way connects Dickens to Dostoevsky. Is that clear?
Let me explain.
A few years ago a juicy story about a meeting between Dickens and Dostoevsky began making the rounds. It first appeared in 2002 in a prestigious publication dedicated to the study of Charles Dickens. It was picked up and printed in a Dickens biography in 2011 and then in other sources. In short, this unknown bit of history – an actual encounter between the great English and Russian writers – became quite the literary sensation. It came with some fun details, including Dostoevsky’s specific impressions of Dickens, and how could we not love it? I mean, Dostoevsky was quite the Dickens fan, reading him at length during his period in exile and after. Scholars have written reams about the connections between the two writers, ranging from the general of N.M. Lary’s Dostoevsky and Dickens: A Study of Literary Influence) and Irina Gredina‘s essay, “Dickens’s Influence upon Dostoevsky, 1860-1870; or, One Nineteenth-Century Master’s Assimilation of Another’s Manner and Vision” to the specifics of Allegra Wozniak‘s paper “Setting as Character in Dickens and Dostoevsky.” A brief, blog-like post on the Russia Beyond the Headlines website stacks up a long line of the similarities in the two writers’ works for those with short attention spans.
I remember the hullabaloo surrounding the unmasking of the hoax several years ago and was reminded of it when doing some armchair research before my latest sojourn to one of my favorite places on earth, London Town.
So, when I happened upon this pub, with its ghostly image of Dickens, a menu featuring “Great Eggspectations,” and the surely legitimate claim that the great writer used to hang out here – I began to let my imagination flow. In fact, Dostoevsky was already on my mind, for I was then on my way to Haymarket, surely no more than a kilometer from here, in order to see what was left of Dostoevsky’s visits there in 1862. (I wrote about that a week or two ago here in this space.) And I began to think. If, indeed, the two had met – although they did not – it could have been right here, just as easily as it was not in Dickens’ publisher’s office, as was claimed by the original hoaxter in 2002. After all, if it didn’t happen, and it didn’t, it might as well have not happened here, where it did not, as any other place. It would make sense. You could probably put the two men in this general area in 1862 – Dostoevsky hanging out at Haymarket, escaping in disgust (or lust) and haggardly finding his way to this little pub, where a gloomy Dickens had just plopped down in a chair at the bar…

We’re not talking “real” here, folks. We’re talking about how fun it is to walk the streets of a city like London and to encounter your heroes as they come to you – by chance, by thought, by imagination.
I peered in the window (see the photo up top) at the Dickens caricature and it all seemed like a dream. It was difficult to determine what was mirage and what was real. For example, the most realistic segment of that first image is actually a reflection – the stately building with the wrought iron fence in front of it. That appears reflected in the window of the Marquis Pub, right next to the warning, “Watch out for thieves, nasty, slippery vermin.” (See the second photo in the block below.) Suddenly everything I was experiencing seemed unreal, and the more unreal it was, the more it seemed like it just might be if only it really wanted to. That’s when a smile came across my face and I recalled in earnest the name of Stephanie Harvey, and her account of Dickens meeting Dostoevsky.
I won’t go into detail about Stephanie or her many other guises – all pseudonyms for one A.D. Harvey (he used at least eight pseudonyms in order to plant and nurture the hoax about the D-D meeting.) You can read the first and most substantial debunking of the myth in the Times Literary Supplement.  You can read Harvey’s own story, including his justification for playing the dastardly trick, in an interesting interview article in The Guardian. From there, if you’re interested, you can branch out and find all the details you crave.
You can think what you want about Harvey and his deed. I, personally, can’t get too worked up over it. Maybe because I have nothing invested in it. Maybe because I love a good joke and a well-constructed myth. Maybe because I’m so used to the world throwing all kinds of nonsense at us every minute of every day, and here, finally, was some interesting and entertaining nonsense that lacked blood, hostility and humiliation. I will say this, were it not for A.D. Harvey, I would never have enjoyed my 15 minutes wandering around the Marquis Pub nearly as much as I did with his crazy concoction rattling around in my head. The upshot for me was this: For 15 minutes outside the Marquis, Dostoevsky and Dickens, did, in fact, meet. In my head. They were there together. And I was there to witness it. No need to print that in any biographies. Scholars, with collars too tight, may frown as they will. Readers, who participate in little miracles like this all the time, will join me smiling, I think. Take a look around these photos. You may see some ghosts. 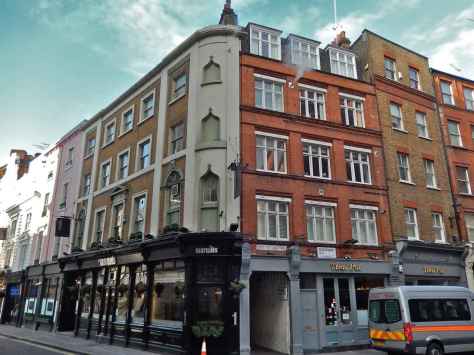