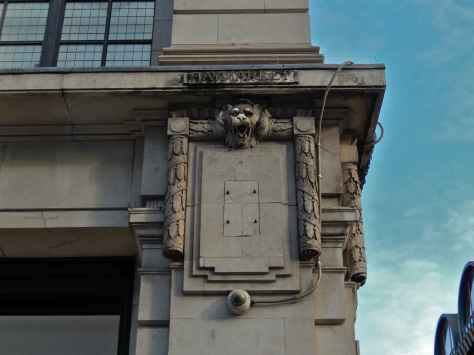 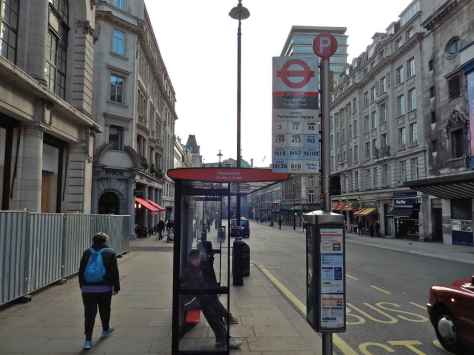 I have a soft spot for things that are that aren’t. To wit, Fyodor Dostoevsky and the Haymarket district in London. Whatever Dostoevsky saw here in the first half of July, 1862, is gone, utterly gone, now. Here is a little of what he writes in his essay, “Winter Notes on Summer Impressions”:
“Anyone who has been to London has probably visited Haymarket at least once at night. This is a district, where, at night, thousands of prostitutes crowd around on a few streets. The streets are illuminated by gas streams, of which we [Russians] have no conception. Fine coffee houses decked with mirrors and gold are to be found at every step. There are mobs here and there are havens. It’s even rather frightening to enter this mob. And it is strangely composed. There are old woman and there are beauties who will stop you in your tracks. Nowhere in the world is there such a beautiful type of woman as the Englishwoman. Everyone here pushes through these dense, crowded streets with difficulty. The crowd cannot be contained on sidewalks, and it spills over into the street. This mob hungers for spoils and throws itself at the first comer with shameless cynicism. Here you will see shiny and expensive clothes, tattered rags, and a sharp difference in ages, all jumbled together. The drunken tramp and the privileged rich man both come here and tromp through this horrible mob. You can hear the din of curses, quarreling, solicitations and the quiet whisper of the still-timid beauty. And sometimes what a beauty it is! Truly keepsake faces [Dostoevsky writes the word “keepsake” in Cyrillic in his Russian text]. I recall going into a casino one time. Music blared, people danced, there was an abyss of humanity crammed in there. The decoration was magnificent. But the grim nature of the British never leaves them even when they are enjoying themselves: they are serious, even gloomy, as they dance, as if each step they dance is done so out of obligation…”
I can’t help but point to the phrase, “I recall going into a casino one time.” The implication is that Dostoevsky came here more than once, although he was in London just for eight days, having arrived in the city July 9, 1862. The place obviously made an impression on him, a very strong one, whether good or bad. It is often written that Dostoevsky was horrified by Haymarket, by the goings-on there, and by London in general. And it is clear from this text that some things did horrify him. But it is just as clear that he was thrilled by much as well – not the least of which was female beauty. He also seemed well capable of admiring finely-appointed interiors, whether it be coffee houses or dance halls. Of course, let us not forget that beauty, particularly female beauty, was a test for Dostoevsky, or, at least, for some of his most complex characters. Which leads me to quote this little bit from Sarah J. Young’s nice blog on the topic of Dostoevsky in London: “[Dostoevsky] seems more sorrowful than shocked at the sight of ‘mothers who were bringing their young daughters into the business [of prostitution]. Little girls around twelve years of age take you by the hand and ask you to go with them’. Prostitution becomes a significant theme in the works Dostoevsky wrote in the next few years, in particular Notes from Underground and Crime and Punishment, and it seems quite likely that what he had seen at the Haymarket had some influence on that.”
One is intrigued (or amused) at Dostoevsky’s declaration that he heard the “din of curses” on the streets of Haymarket, when, as Kyril FitzLyon writes in the introduction to his translation of “Winter Notes,” the great Russian writer did not know English. “It is clear, of course,” the scholar writes, “that Dostoevsky did not form his impressions of England unaided. A week’s stay in London could not have either supplied him with the necessary material or given him a sufficient insight into the British character, particularly as he knew no English. (He admits to his ignorance of the language in one passage of the book, yet in another he claims to base certain of his conclusions on English newspaper reports.)”
Then there is Dostoevsky’s curious use of the English “keepsake” in reference to unforgettably beautiful English women. This sounds like one of those instances of a writer picking up a local word somewhere, understanding it as best he could, and sticking it into a piece of his prose in order to give it a feel of authenticity. I’m not criticizing him for doing it, I like the phrase. But I do think it is another small detail that suggests Dostoevsky was out of place as he wandered the streets of London. 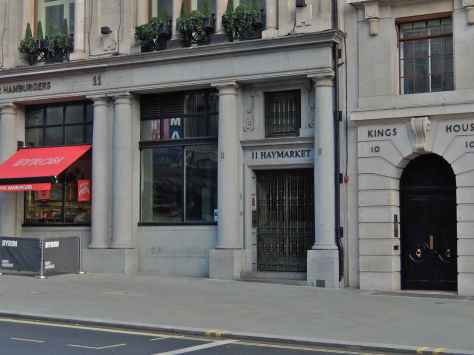 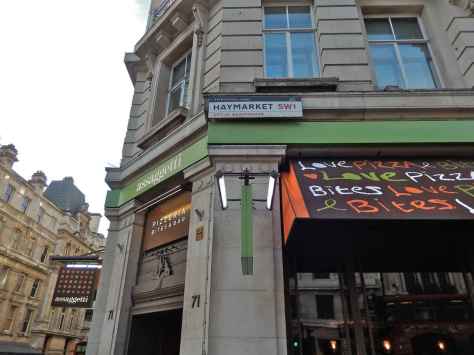 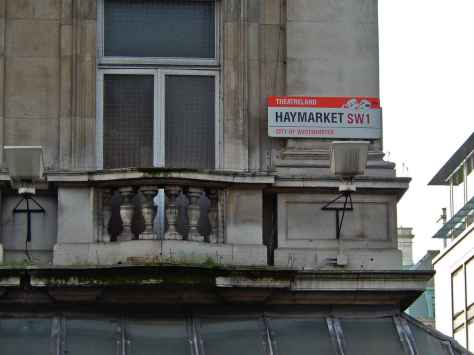 Young also talks about two other locations that Dostoevsky probably visited – Whitechapel and the famous Crystal Palace (which makes a substantial appearance in Notes from Underground). The Crystal Palace was a “futuristic” structure of iron and glass built in Hyde Park for the Great Exhibition of 1851, and moved in 1854 to Sydenham Hill, which is where Dostoevsky would have encountered it. (Pyotr Tchaikovsky was also a visitor.) “The Crystal Palace epitomizes the ‘proud and dismal spirit’ (p. 42) of materialism, and Dostoevsky perceives this same spirit in the two other places he describes: the Haymarket and Whitechapel,” writes Young. I briefly bring the Crystal Palace into this discussion because of a wonderful bit of serendipity that visited me when I, myself, was in the Haymarket district. I happened to look up and see that a bus passing me by was headed for, of all places, the Crystal Palace neighborhood, which is where the relocated Crystal Palace stood until it burned down in 1936. (See first photo immediately following.) In a place that, as I say, has very little left to connect a visitor to what Dostoevsky would have encountered, this provided an extra little tweak of connection. If you’re interested in more about Dostoevsky and the Crystal Palace, I suggest you see another of Sarah J. Young’s blogs on that precise topic.
Some of the buildings represented in my photos would probably have been standing when Dostoevsky was there. Take a look at the top photo above, for example. That lion with frame (with plaque missing) below the word “Haymarket” surely would have been witnesses to the venerable, surely dazzled, if not befuddled, Dostoevsky making his rounds here. There are still coffee shops and cafes here, which, while having absolutely nothing to do with anything that would have been here 150 years ago, do indicate that the tradition of informal eateries in this location remains.
I almost chose not to come here and photograph because my advance research suggested so unequivocally that today’s Haymarket and the Haymarket of the 1860s are virtually two different places. Fortunately, however, I overcame my instinct to save myself the time and labor. In part because of the almost magical Crystal Palace bus, in part because of the few walls and decorations that surely remain from that time, and in part because of the way that places and our thoughts about them are capable of acquiring unexpected meaning and substance, this turned out to be a memorable visit. Dostoevsky is long gone from this place. But in some intangible way I brought him back with my thoughts, jumbled and vague as they were. It was a genuine encounter. 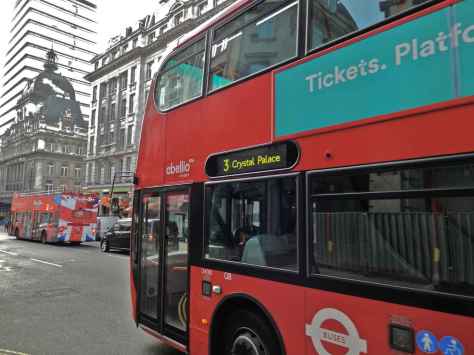 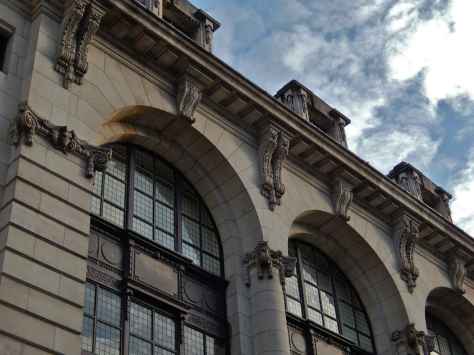 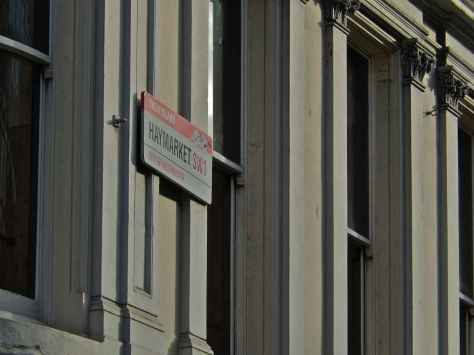 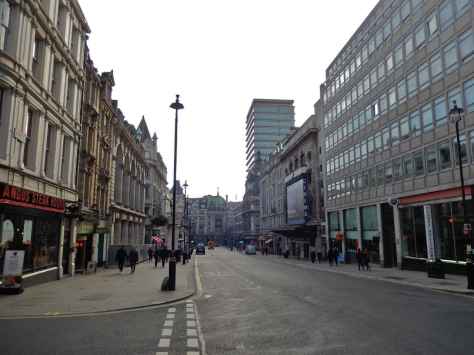 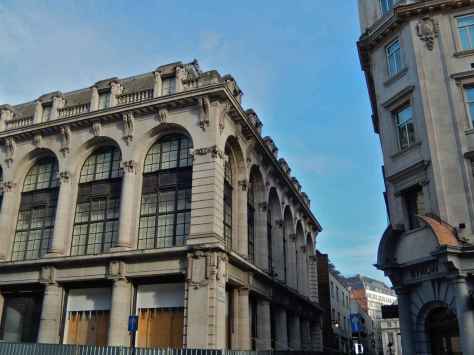