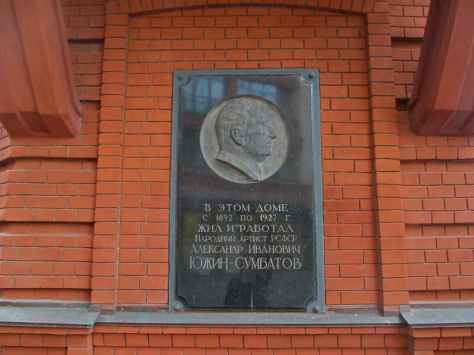 So is it Sumbatov-Yuzhin, as I have written it? Or is is Yuzhin-Sumbatov, as the people who made the plaque honoring this actor and writer put it? Or is it just Yuzhin, as Russian Wikipedia tells us, although his real last name was Sumbatov. (Yuzhin, roughly suggesting “southerner” in Russian, was a pseudonym.) But the authenticity of Sumbatov is not entirely true, either, because the man in our sights today was born into the princely Georgian Sumbatashvili family, hence, he was properly Sumbatashvili.
Just to make things more fun, the first time our southern Sumbat ever performed on stage – this was in Tiflis (today Tbilisi), Georgia, in 1876 – he used the pseudonym of Solntsev.
The fact of the matter is that none of the above variants is wrong. It all depends on what activity and what part of the man’s life you are referring to. I own a collection of his plays where we can find the following sentence embedded in the introduction:
“…These views and convictions of Yuzhin-the-actor found their most vivid expression in the plays of Sumbatov.”
We won’t pursue precisely what these views and convictions were in the eye of the author T. Knyazevskaya. The article was written in 1961 and is filled with all the ideological pathos of the Soviet Union of that time. (For example, my five-volume Russian Theater Encyclopedia, published about the same time, writes that Yuzhin’s mission as an actor was to carry the kernel of good to his public. Pardon me while I wipe the spittle from my shirt-front.) We are more interested in cutting through the morass of enforced opinion in order to discover a bit of the reality surrounding this fascinating, influential, talented man of the Russian theater. As far, then, as the name is concerned, he was Yuzhin-Sumbatov (or just Yuzhin), if you are talking about his work as one of the great actors at the Maly Theater from 1882 until his death in 1927. If you have in mind his considerable work as a playwright (he wrote at least a dozen plays and was considered by the influential critic Alexander Kugel to to be one of the finest Russian playwrights of the late 19th century) he was either Sumbatov-Yuzhin or Sumbatov.
Alexander Sumbatashvili was born in 1857 in the marvelously-named village of Kukui not far from Tula, which is south of Moscow. As I have mentioned, he died in 1927, a giant in the field of Russian theater. He was a man for whom just one hat was never enough. And he excelled at everything he did, as an actor, a writer, an administrator, and a manager. Like Alexander Ostrovsky before him, he was often the brains and motor behind the Maly Theater during much of his tenure there. He held various administrative duties from 1909 on. He was the managing director from 1923 to 1926.
For most of his years in Moscow he occupied apartments (I purposefully use the old-fashioned plural, because surely he occupied a suite of rooms) in a beautiful Moscow building at 5/1 Bolshoi Palashyovsky Lane, just a stone’s throw from Pushkin Square. Actually the building is located equally at the beginning of Tryokhprudny Lane, but the main, arched, entrance is located on Bolshoi Palashyovsky.
The plaque honoring Sumbatov-Yuzhin was unveiled in 1959. The entire building, including the plaque, was given a major face lift just recently. If I am not mistaken, the scaffolding only came off this year after several years of work. It would appear to have been worth the wait. From the outside, at least, the building is gorgeous.

After the actor named Solntsev began his career in Tiflis in the mid-1870s, he moved on to St. Petersburg where he performed in 1878 and 1879. He joined the company of the independent Brenko troupe in Moscow in 1881, and then settled into his storied career at the Maly Theater in 1882. Yuzhin excelled in the great, classical roles, in both tragedy and comedy. He played Moliere and Shakespeare as if he owned them. (This doesn’t surprise me – the Georgian temperament is, indeed, Shakespearean.) He started out by playing Schiller and Hugo. You get the picture. A Russian film site, which provides a detailed bio for the actor, says this: “In Yuzhin’s passionate, exalted theatrical performances, contemporaries espied heroic motives, so attractive to the liberal-minded youth of the time.” As is fitting of a great star, he played Macbeth in Macbeth (1890), Coriolanus in Coriolanus (1902), Richard III in Richard III (1897), Ruy Blas in Ruy Blas (1891), Othello in Othello (1908), and Figaro in The Marriage of Figaro (1910)… He performed in over 20 plays by Alexander Ostrovsky and played two of the great Russian roles in different productions of Alexander Griboedov’s Woe from Wit (Repetilov in 1911, Famusov in 1915).  That film site suggests it was Yuzhin, whose memorable performance of Repetilov (essentially just one scene in the play), expanded that seemingly small role into one of the tradition’s classic roles.
You can hear an audio recording of Yuzhin’s Othello on YouTube.
Sumbatov-the-playwright virtually disappeared from sight after the author’s death. His plays were not produced, nor were they published with any regularity. Thus I remember with what interest I set out for the Sovremennik Theater in 2010 to see Yevgeny Kamenkovich’s production of Sumbatov’s The Gentlemen, originally written in 1893, published in 1896 and first performed in 1897. It would be my first-ever opportunity to see a Sumbatov play on stage. Here is the beginning of the review I subsequently wrote in The Moscow Times:
“The notion of Yevgeny Kamenkovich directing The Gentleman at the Sovremennik Theater would seem to be someone’s weird idea of a joke.
“The play is a totally forgotten comedy about the excesses, dangers and cruelty of wealth by the once-famous, now rather obscure, actor and playwright Alexander Sumbatov-Yuzhin. Written in 1897, it has rarely been revived since.”
If you are so inclined, you can read the rest of what I wrote on what is left of the website of The Moscow Times. The nutshell is that I was knocked out by the play itself. I could see the kind of national character portraits that Ostrovsky was so good at painting; I could see an author who knew exactly how the stage works; I could see an author who knew human foibles well and knew how to exploit them in a dramatic fashion.
I can’t say that I expected a Sumbatov boom to follow the wonderful production at the Sovremennik (where it continues to play in repertoire five years down the road), but I would have liked to have seen it. It didn’t happen. As such, for the time being, Sumbatov the writer remains deeply obscure, regardless of how unfair that may be. I, however, always doff my imaginary cap to the man – both the actor and the writer – whenever I pass by his former residence in central Moscow. 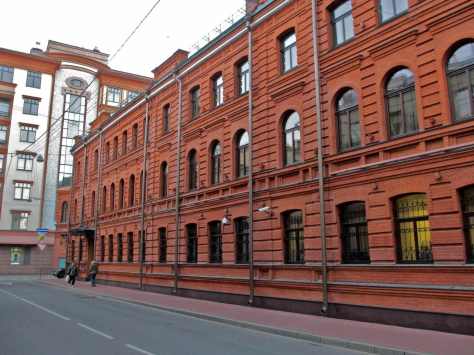 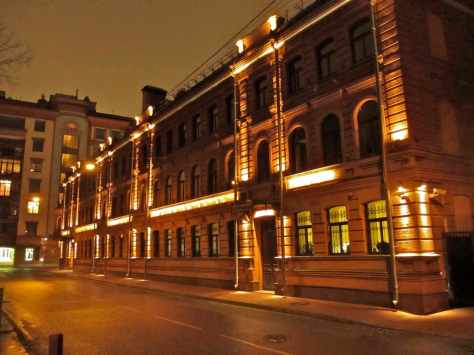 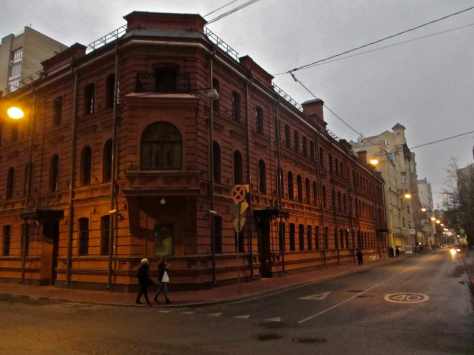