I now never go out without my camera in my pocket or my briefcase. Today’s post is proof of why. I recently sat in on a dress rehearsal of a new show at the School of Dramatic Art and, afterwards, I had about 40 minutes to kill before I was to meet my wife for lunch. So I started out walking up and down the neighboring streets there in the Sretenka district, and – lo and behold! I happened upon a plaque informing me that Anton Chekhov lived in the building at 3 Maly Golovin Lane between 1881 and 1885.
Now, if I had previously come upon the Chekhov Addresses page on one Chekhov website I might have known that. Or, it’s possible that I would have been so daunted I wouldn’t have bothered to look. This page lists 78 Moscow addresses that are bound up with the life and work of Chekhov! I can see my work is cut out for me now…
According to this site, which provides the added information that Chekhov first appeared in this home in the fall of 1881, and that he and his family moved out in October, 1885, Chekhov occupied at least two different apartments in the building at different times. The site continues:
“[Chekhov’s] family lived in four rooms in the basement for about a year. Then, when Chekhov graduated from university, they moved, in the same building, onto the second floor. Here A.P. Chekhov hung out his sign ‘Doctor A.P. Chekhov’ for the first time. In this same apartment N[ikolai] Leskov visited Chekhov in October 1883 and gave him some of his books. The stories ‘Fat and Thin,’ ‘Swedish Matchstick,’ ‘Surgery’ and ‘The Chameleon’ were written in this building.”
I did a count of the stories, feuilletons, jokes, sketches, letters-to-the-editor, etc., from this period, which are published in the great 30-volume collected works. It comes to a whopping 300 titles, give or take a few. It would appear that the entire second and third volumes in the collected works (along with parts of the first and fourth) were written while Chekhov lived at Maly Golovin.
Russian Wikipedia informs us that Chekhov wrote the story “The Seizure” here, a tale of prostitution. This was a semi true-life story that described the environs of Bolshoi Golovin Lane (formerly Sobolev Lane), a nearby street where a brothel was located. Chekhov wrote to his friend and publisher Alexander Suvorin, “Why doesn’t your newspaper write anything about prostitution? It is, after all, a terrible evil. Our Sobolev Lane is a slave trade market.” 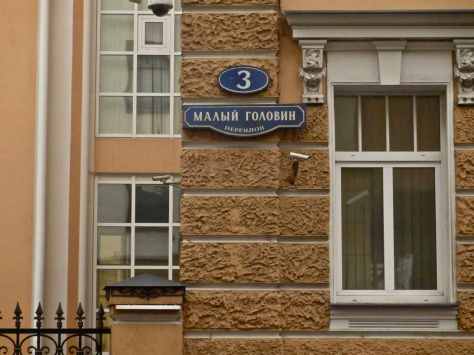 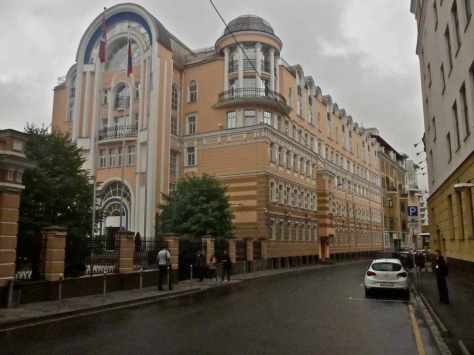 On January 29, 1883, Chekhov wrote to his friend Gavriil Kravtsov, that his life at this time was “tolerable,” but his health was “alas and alack!” (He was, of course, 22 at that moment.) The letter, in part describing his state while living on Maly Golovin, continues:
“…You work like a lackey, go to bed at 5 a.m. I write on commission for the magazines and there is nothing worse than trying to meet deadlines. I have money. I eat well, I also drink and dress not too badly, but…there is no meat on the bones! People say I have lost weight to the point that I am unrecognizable.
Well, and women, too…
I work in Piter [St. Petersburg] and Moscow, have become well known, I am acquainted with everyone…  It’s almost a cheery life. In summer I will go south to correct my health….”
Chekhov signed this little letter, “A. Chekhov, or, A. Chekhonte, M. Kovrov, Man without a Spleen.”
The building you see in the photos here is only partly reminiscent of the building Chekhov would have known. It was built in 1904 by the architect Leonid Stezhensky. It was a two-story building at that time, and consisted only of the central part of the building we have today. You can see the difference between the second and third floors in the photos here. New parts of the building were added on either side 11 years after Chekhov moved out, and at least some of the upper floors were added the year after Chekhov died. The fancy turrets and arches that belong to the structure occupied by the Eurocement Group in the 21st century were not part of the building Chekhov knew.
And yet, for all the changes made to this structure, this is probably the only building left at least partially intact from Chekhov’s earliest years in Moscow. 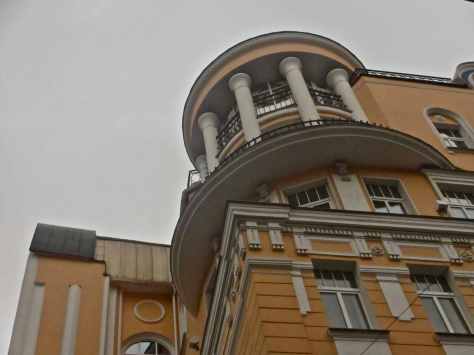