This, I presume, is precisely why someone once came up with the idea of putting memorial plaques on buildings: To help keep us from slipping entirely into ignorance. I’ve lived in the neighborhood of this building at 7 Malaya Polyanka, Bldg. 7, for a decade and a half now (it’s right at the corner of Malaya Polyanka and 1st Khvostov Lane), but only recently came to realize its significance. One day as I was snooping around with my camera I, for the first time, pushed my way past the old yellow two-story building on Malaya Polyanka and took a look at the imposing red building that rises behind it. It’s one of those odd examples of the way Moscow sometimes crams large buildings into small former courtyards, creating congestion and claustrophobia when you think maybe they really shouldn’t have done that. I usually blame benighted Soviet architects for doing that – there are hundreds if not thousands of examples of this being done in the Soviet period – but this is another case entirely. This building went up before the Revolution, and it surely must have stood out at the time as a remarkable, if overbearing, addition to the neighborhood.
So I slipped back to look at what this building looked like and I was greeted by two different plaques. One is one of those generic types indicating when the building was erected (1915 by prominent architect Vladimir Shervud), and that the building was occupied in its first seven years by the writer Ivan Shmelyov (1873-1950). A second plaque devoted to Shmelyov alone hangs on the wall on the other side of the entrance to the building.
I had only vaguely heard the name Shmelyov. So cursorily, in fact, that it meant virtually nothing to me. I went back to my encyclopedias and history books and was fascinated to find that Shmelyov was a major writer of his time. In fact, I knew perfectly well a film adaptation of one of his early and most successful novellas, The Man from the Restaurant. Published in 1911, it was made into a famous film in 1927 starring Mikhail Chekhov by Yakov Protazanov. Shmelyov was a fascinating man with a rich, very Russian family history. His father was a merchant who kept shops, bathhouses and other enterprises around Moscow. The family identified with the Old Believers, a branch of the Russian Orthodox Church which did not accept reforms that were pushed through in the 17th century. Ivan grew up in a strict, religious, patriarchal home. This remained a part of his world view for the rest of his life, sometimes as he rebelled against it, sometimes as he reclaimed it. He grew up mostly in the general region of this building in the Zamoskvorechye neighborhood, where outside, on the street, he ran into a very different kind of life among the street urchins and the children of many emigrants from Central Asia who have always gathered in this area (it continues to be true today). Shmelyov talks about the “education” the street offered him, and it helped add a strain of tolerance and curiosity to his unbroken strict views of the world. 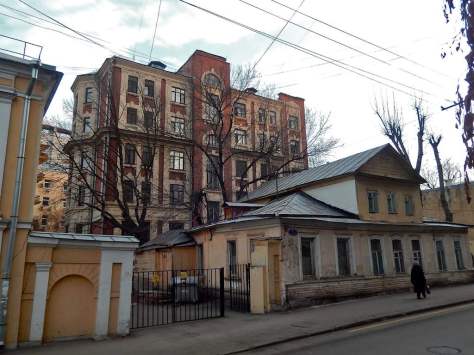 By the time Shmelyov moved into this building he was already an established writer with close friends in high places – Anton Chekhov, Maxim Gorky, Ivan Bunin and many more. Shortly before taking up residence here a large, 8-volume collection of his works had been published. I can’t quite put a finger on how long he actually lived here. The plaques, and various internet sources, say he was here from 1915 until 1922 when he emigrated to Europe. But these same sources and others also say that, while he welcomed the Revolution at first, he soured on it quickly and left for Crimea to avoid the excesses he saw taking place before coming back through Moscow in order to emigrate. One assumes, then, that Shmelyov actually resided at this address regularly only from 1915 to, perhaps, 1918. But that’s my guess.
In any case, by emigrating, and by continuing to make his religious upbringing a large part of his work, Shmelyov was guaranteed to be shut out of the pantheon of Soviet writers. He was well-known in emigration, earning the praise of Thomas Mann and Gerhart Hauptmann for a documentary book called The Sun of the Dead (1923) about the horrors of the Revolution and Civil War coming to Crimea. Shmelyov’s son Sergei was captured and shot by the Red Army, and Ivan himself, being a reserve in the Tsarist Army, was in danger of encountering a similar fate.
Beginning in 1990 Shmelyov’s works began to be republished in Russia prolifically, either for the first time or for the first time since before the Revolution. The brilliant encyclopedia Russian Writers of the 20th Century (Russkie pisateli 20 veka: Moscow, 2000) counts around 45 major works by Shmelyov. “Shmelyov,” writes the scholar O.N. Mikhailov, “was far from the classical precision and clarity of Ivan Bunin’s descriptions; from Boris Zaitsev’s penetrating, moody lyricism; and from the semi-grotesque protuberance of Leo Tolstoy’s or Yevgeny Zamyatin’s characters. But at times Shmelyov nearly attains equality with each of these writers…”   Wolfgang Kasack, in his wonderful Dictionary of Russian Literature since 1917, writes, “Shmelyov’s style can be too lyrical and overly emphatic. Masterly is his grasp of the skaz style, interrupting the action of the plot by switching to a fictitious narrrator. Here Nikolai Leskov’s influence can be seen. Leskov’s writings, with those of Fyodor Dostoevsky, had an effect on Shmelyov.” 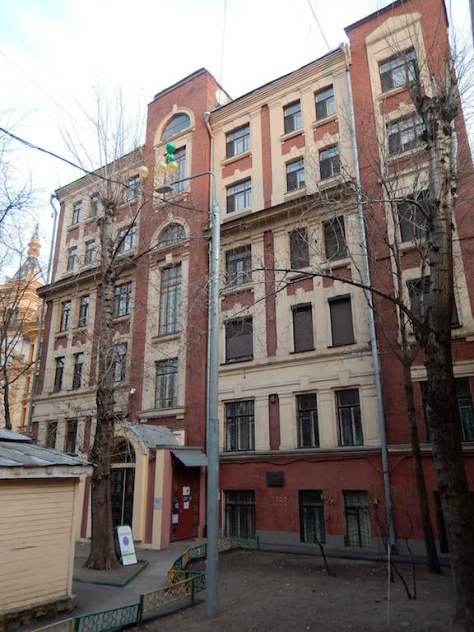