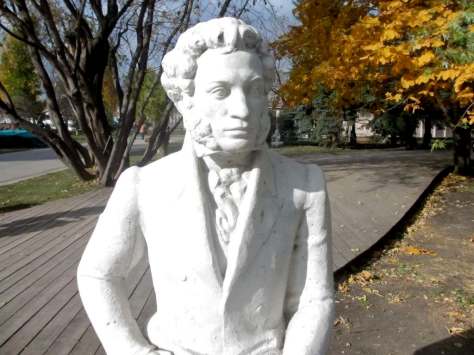 Today’s message is short and sweet: Even Pushkin ends up in dump heaps.
But what impresses me is not so much that somebody removed this small Pushkin statue to Moscow’s Muzeon Park of Fallen Monuments to share space with the disgraced Joseph Stalin and Felix Derzhinsky alongside more respectable company such as Mikhail Lermontov, Mikhail Lomonosov and others. Everybody has their bad days. No. What gets me is the way it was done. Look at these photos. The great Pushkin was just  unloaded at a corner between two sidewalks going different directions. Now, it’s true you can find photos of this statue on the net that aren’t quite as bad. Some show grass under the base on which his feet stand. Some show him looking in one direction, some show him looking in another. But in all cases Pushkin more or less looks like  a sore thumb in a bad place.
The photo immediately below is the most damning. I realize this was probably a temporary thing. I just happened to come along with my camera and catch it for eternity. But, still. How could this have happened for more than 10 minutes? How could it have happened at all? Somebody dug up a sprinkling line or something running through the environs, and he or she simply piled the dirt up on Pushkin’s feet! What kind of a person do you have to be to throw dirt on Pushkin’s feet? Did it never occur to this person that, maybe, this shouldn’t have been done? Or that, maybe, it ought to be undone once it was done? Which brings us to the next question – why hadn’t anyone ordered the great poet’s feet to be cleaned? Anyway, just beyond this rather forlorn Pushkin stands another abandoned object, perhaps a pedestal for some statue that didn’t make it here in one piece. This whole “ensemble” of wayward, tilting pedestals and half-buried Pushkins stuck in corners is just too much for me to bear.

As for the statue itself, it is the work of Aldona Nenasheva. She created it in 1987. This much I’m able to glean from the fairly informative Muzeon website.  I’m not able to glean much more. I don’t know why her Pushkin is sitting here, and although I don’t know this for a fact, I suspect he was intended to sit somewhere else. In a vain search for answers to these and a few other questions, however, I ran across quite a bit of commentary about this little statue by others. It appears to be a fairly popular likeness. Folks talk about its philosophical air, its culture, its whatever all else. I must admit I was surprised. It’s possible I was just thrown off by the dirt on his feet, but this Pushkin looks to me like one of those miniature plaster casts that you’d buy at a tourist trap. Okay, there’s a bit of a thoughtful gaze and there’s something nice about his curly hair being picked up by the ruffles on his shirt. But, still. Isn’t this cookie-cutter Pushkin? The Muzeon site assures me it’s not. Here’s what it has to say:
“The work of A.M. Nenasheva clearly reflected the general stylistics of the development of Soviet sculpture of the last decades: the revealing of the heroic in an everyday image of a contemporary; the expansion of theme in minimal movement; the development of monumental forms; keen psychological portraits.”
Or, maybe this is just another example of why I ran screaming from academia when the opportunity presented itself to me. What a scholar can’t say when s/he begins piling words on top of one another…