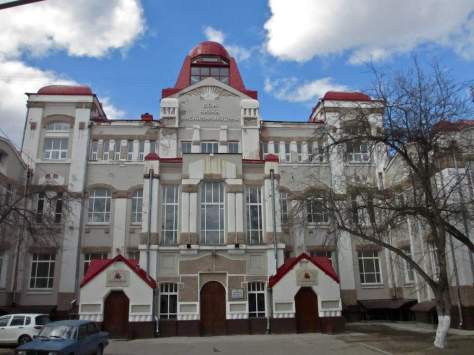 Pyotr Makushin (1844-1926) was a man after my own heart. He founded the first public library in Tomsk and he founded the first bookstore in that splendid city. The building you see in the photo above, located at 4 Solyanaya Square, is Tomsk’s House of Science and it is named after Makushin. Better than that, the great man is buried right there on the grounds – not back in the back somewhere, but right out front where you can daily take it as a reminder of the way that all things touched by humans go – bookstores included.
Makushin was born in a village near Perm and he came to Tomsk in 1868 as the overseer of the local religious seminary. But it wasn’t long before he felt the call to do other, greater, things. In 1873 he opened the Mikhailov and Makushin bookstore, the first in all of Siberia. Russian Wikipedia tells the details well: “By the end of the 19th century this company was the biggest bookseller in all of Siberia. It had a large affliate in Irkutsk, and it had small book shops in 125 villages of the Tomsk Region. It maintained a stock of approximately 250,000 books…” An online encyclopedia of Siberia adds that in 1891 Makushin opened up bookselling outlets along the Ob-Yeniseisky Canal and along the Central Siberian railroad. Not surprisingly, I would think, Makushkin was also a publisher – of books and of newspapers.

Basically, Pyotr Makushin was a one-man system of education and enlightenment. That Siberian encyclopedia tells us that in his life he spent enough on charity (half a million rubles) that, had he chosen to, he could have purchased an entire block of Moscow real estate. I wonder if that underestimates his contributions. For example, the House of Science in Tomsk alone was built on Makushin’s money. Basically, the man was unstoppable. In addition to everything else he also had a hand in establishing Tomsk’s first free hospital, kindergarten and telephone line (!).
One more time from that encyclopedia of Sibiria: “Pyotr Makushin was the author of the statutes for, and the chairman of, the School Society which was opened in 1882. This was a volunteer organization bringing together citizens who were prepared to help public education. The yearly dues were just one ruble, so its membership numbered in the thousands (Tomsk then had a total population of 40,000). Donations were used to help poor schoolchildren and to provide awards for the best teachers. At its own cost the society maintained three beginning gymnasiums for boys, opened a free public library, offered evening courses, scheduled public readings on Sundays, and maintained a museum of applied knowledge.”
All of this, we are told – and we are not surprised – raised the ever-vigilant suspicions of the Russian government. What the hell was he doing helping all those people live better lives? In order to find out, the Tomsk police officially kept an eye on everything the man did at least from the late 1880s throughout the 1890s.