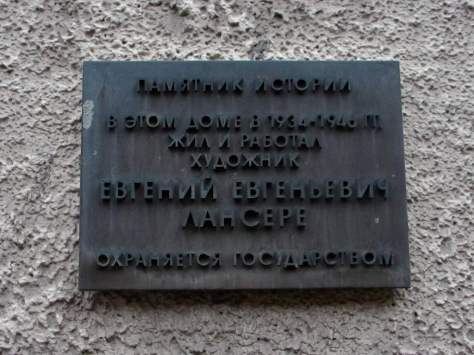 There is no honest way for me to start this little excursus about Yevgeny Lanceré (1875-1946) other than to quote a whole paragraph from Wikipedia (I keep Wiki’s rather funky spellings as well as their links):
“Lanceray was born in Pavlovsk, Russia, a suburb of Saint Petersburg.  He came from a prominent Russian artistic family. His father, Eugeny Alexandrovich Lanceray, was a sculptor. His grandfather Nicholas Benois, and his uncle Leon Benois, were celebrated architects. Another uncle, Alexandre Benois, was a respected artist, art critic, historian and preservationist. His great-grandfather was the Venetian-born Russian composer Catterino Cavos. Lanceray’s siblings were also heirs to this artistic tradition. His sister, Zinaida Serebriakova, was a painter, while his brother Nikolai was an architect. His cousin, Nadia Benois, was the mother of Peter Ustinov.”
Talk about genes.
I had never heard of Lanceré until I happened upon this plaque on the corners of Bobrov and Milyutinsky Lanes.  But the great Benois family, the great Zinaida Serebryakova, Peter Ustinov, for God’s sake…
So I did what I have often done before making other posts on this blog – I did a bit of armchair research. And, as I might say if I were writing this in Russian, I liquidated a bit of my own ignorance. I say only “a bit” because it turns out my ignorance in this case was embarrassingly prodigious.
Lanceré was associated with some of the most important people and movements in Russian art of his time. He exhibited and published with the famous World of Art group, he published his work in the Golden Fleece journal, and Sergei Daighilev included his work in at least one of this exhibitions in Paris (1906). As John Milner tells us in his wonderful A Dictionary of Russian and Soviet Artists, 1420-1970, Lanceré created the poster for Diaghilev’s Exhibition of Historical Russian Portraits (1905).
The artist clearly had a severe case of wanderlust. Throughout his life he traveled to, and lived in, France, Italy, Germany, Japan, Turkey, Dagestan, Tbilisi, Petrograd and Ust-Krestishche near Pskov, to name a few of the places. After moving to Moscow in 1934 he created decorations for the Kazan Railway Station and the Moskva Hotel. I can’t help but wonder what happened to this latter work (he did paintings for the hotel’s restaurant) when the Moscow authorities barbarically reduced the entire hotel to rubble a decade or so ago in order to rebuild it from scratch. That was another of those horrible decisions of then-Moscow Mayor Yury Luzhkov to “renew” Moscow by ripping down the old and then putting back up cookie-cutter imitation replacements.
Again, because I know nothing myself and am leaning entirely on the knowledge of others, allow me to quote this pithy description of Lanceré’s work pulled from a Russian Academic internet encyclopedia: “Lanceré’s talent was diverse, he created vignettes, letter fonts, architectural sketches, illustrations for fairy tales and plays, decorative panneaux and caricatures. His historical paintings were awash with a love for old Russia and exhibited a profound feeling for the era…”

The building in which Lanceré lived from 1934 to his death in 1946 is not particularly striking, although it’s massive. It has had an interesting history. Construction was begun on it in 1917, just before the Revolution began. For that reason, construction was stopped while Russia figured out where it would go next. In the meantime, the unfinished building served as a hiding place for revolutionaries who famously attacked the post and telegraph office a block or two away. The building was completed only after the Russian Civil War concluded in roughly 1922. (I’m pulling this information from the fabulous mos.ru site about the history of Moscow buildings.) While living here the artist was primarily occupied with plans to create works in the so-called monumental style, although, we are told, very little of what he planned was actually completed. The panneaux at the Kazan Station are considered to be an example of what the artist was capable of, had he been able to do more. I don’t know whether Lanceré ran into problems for political reasons or not, but it is a fact that he lived in this building, which has since taken on his name as the Lanceré home, during the height of the Purges and the entire Second World War, not an easy time to put it mildly. He did win a Stalin Prize in 1943, for what it’s worth.
Today Lanceré’s grandson Yevgeny Lanceré, a contemporary artist, lives in the building. Immediately below is a shot of a former store or cafe entrance on the building’s western side that bears witness to the fact that it is associated with artists. Someone, perhaps leaning on Magritte’s famous “This is not a pipe” painting of a pipe, has scribbled into the whitewash the teasing words, “This is not a cafe. This is not a store window. This is not a door.” 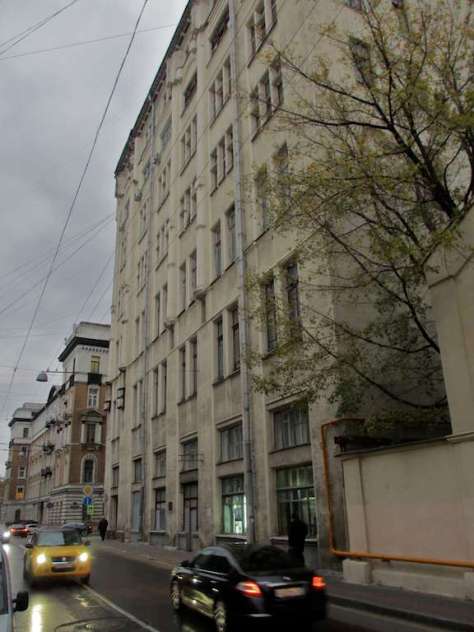