I was going to a show at the Et Cetera Theater not long ago and I arrived a bit early. Since I had my trusty pocket Canon with me, I went out hunting. Moscow being Moscow, it didn’t take me long to find my first prey. This building at 1 Bobrov Lane (Pereulok) one day – June 18, 1920, to be exact – hosted some famous visitors. When I first glanced at the plaque I thought, “pass” – I’m not much interested in all the places that Vladimir Lenin slept, talked, listened, coughed or did whatever else he did in seemingly half of Moscow’s buildings. But at second glance this quickly became interesting. Lenin not only stopped by to visit, he brought the “great proletarian writer” Maxim Gorky along with him. But it gets even better – they came here to inspect the Red Army’s latest artillery arsenal. This building housed Moscow’s Central Artillery Department. You look in the windows today and you can’t quite get your head around the idea of tanks or gatling guns or whatever rolling around on the hardwood floors under the chandeliers. But, hey, things were a bit topsy-turvy in Russia in 1920.
After spending 26 years of my life in Russia I have become a great fan of the playwright Alexander Sukhovo-Kobylin. He has a line in one of his plays: “Believe, when people speak!” Stop and think about that a minute. Whew. Actually I should give the rest of the quote to fill it out: “Believe, when people speak! For everything is possible!” There it is, the punchline. So, hey – if somebody tells me artillery stuff was rolling around here on June 18, 1920, and Lenin and Gorky stopped by to see it, I’ll buy it. Stranger things have happened. 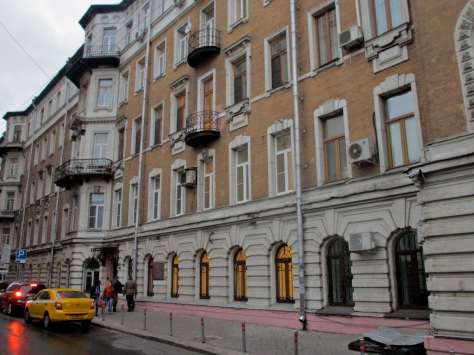 But most of all what this plaque reminds me of is how creative people – basically rebels at heart, because if you’re not a rebel, you’re not much of an artist – constantly find themselves rubbing elbows with power and loving it. Okay, I’m willing to make concessions for centuries long gone when painters or poets could not survive without the patronage of the local king or prince. I’m not one to apply contemporary standards to the past. It’s not just unfair, it’s silly. You have to open up your brain a little more than that. But as we get closer to the present this kind of camaraderie makes less and less sense to me. I mean, by this time – that is, by the month, week and day that Gorky went out inspecting guns with Lenin – there were plenty of examples of creative artists taking care to distance themselves from power. Gorky was no coward. And he was no man’s fool. He had the full respect of Leo Tolstoy and Anton Chekhov. That’s a hell of an impressive calling card. So what was Gorky doing snuggling up to Lenin?
Understand me properly here. I am raising straightforward questions. I don’t intend to cast aspersions with my questions. I ask them because I’m interested in the answers. I’m struggling with my own generation these days. Every single damn day brings new horror stories about people in Russia who should know better but don’t. For example, the internet is buzzing today with the news that the popular Russian actor Mikhail Porechenkov, a member of the Moscow Art Theater and a big movie star, went down to Donetsk, Ukraine, a day or two ago, joined a group of Russian separatists, put on a “press” helmet at the local airport that has been a besieged battle zone for months, and started shooting in the direction of Ukrainian soldiers.
Pause.
Let that sink in.
Now he’s claiming he didn’t know he was wearing a “press” helmet, he swears that the bullets were blanks, and he’s even insisting that the whole thing was just a promo “shoot”… But do we really need to go farther to find the precise description of a stupid, idiotic dolt?
So, you see, when I walk past the lovely building at 1 Bobrov Lane and I see the notification that Gorky hobnobbed with Lenin in these environs, I’m thinking – is there something I can learn here? Is there something history can teach me?
Gorky pretty much threw his support behind the Marxists in 1899. (I’m just borrowing a few facts from Russian Wikipedia.) He became close friends with Lenin in 1902. At least two years before that he had become close to Tolstoy and Chekhov. Unhappy with Russian politics and life, Gorky lived on the island of Capri from 1906 (a year after the so-called failed Russian Revolution of 1905) to 1913. He again left the country in 1921 (a year after his visit to the artillery department) and lived in Sorrento, Italy, until 1928. It’s pretty much common knowledge that Joseph Stalin lured Gorky back to the U.S.S.R. by giving him a gorgeous, palatial house to live in and promising to make him the “great proletarian writer.” Gorky trusted Stalin enough to buy into that promise. After returning Gorky was photographed having friendly chats with Big Joseph S, and he occasionally interceded to try to save writers and artists from persecution. I’ve never seen a list of his failures and successes, so I don’t know how often he was able to actually help anyone. I do know that when Gorky died in 1936 there was plenty of talk, which continues today, that he was murdered by Stalin’s secret police.
I’m telling you, don’t attach yourself to governments or the people running them. 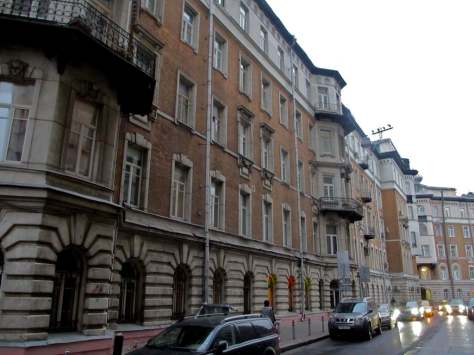