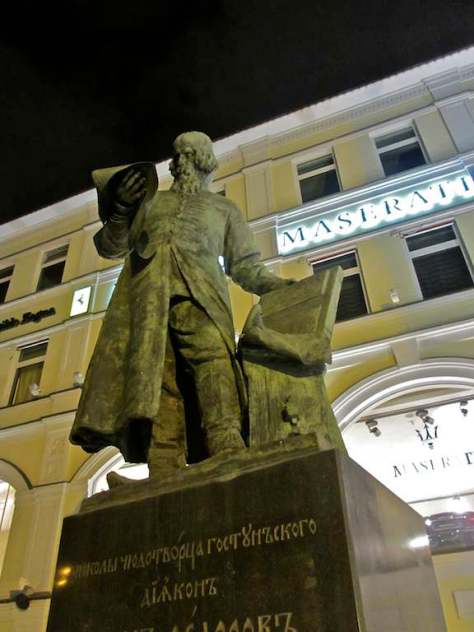 Ivan Fyodorov, born between 1510 and 1530, died in 1583, the first printer/publisher in Russia. Only his name wasn’t really Ivan Fyodorov; we really don’t know when he was born; and he wasn’t the first person to print texts in Russia – or in Ukraine, where he is also often called the father of publishing. So much for the facts of history. Fyodor was Ivan’s father’s name and, according to the customs of the Eastern Slavs in the 16th century, a man took his second name from his father. Sometimes Ivan used the form of Fyodorovich, the contemporary patronymic form, sometimes he called himself Ivan Fyodorovich Moskvitin, implying that he was from Moscow. Only he wasn’t originally from Moscow. No one knows for certain, but it would appear that he came from lands that are now attached to Belarus, and he may have studied in Krakow, now belonging to Poland.
Ivan Fyodorov was taught the art of bookmaking by a Dutch master brought to Moscow by Ivan the Terrible. He began printing The Apostle – a combination of parts of the Gospels, and stories of the deeds and declarations of the Holy Apostles – on April 19, 1563, as is engraved on the face of this monument to the publisher in the center of Moscow. He completed printing the book on March 1, 1564. These dates are what are important in the determination of Fyodorov as the first publisher of a book in Russia. In fact there had been at least seven other books printed in Moscow by this time, but none bore dates or the names of the printer/publisher. Fyodorov set history in motion by giving us a name and dates to go with the event. It is generally considered that Fyodorov’s books are of a much higher quality than others that were printed in and around that time. Apparently Fyodorov fell out with some of his colleagues (maybe the ones who were making worse books?) and he left Moscow with his printing partner Pyotr Mstislav in the mid-1560s for lands that are now considered Ukrainian. 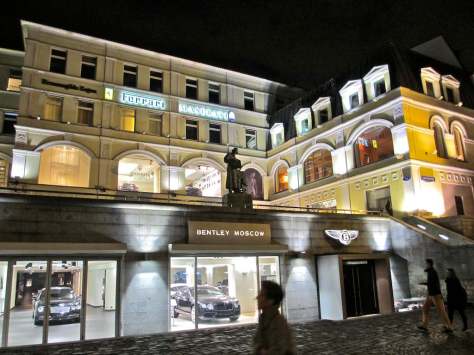 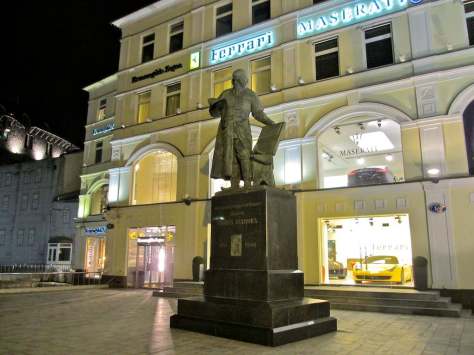 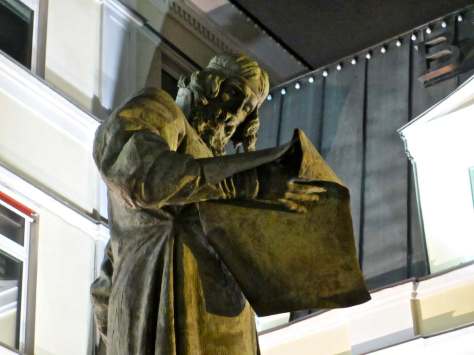 The monument pictured here is now located in rather spectacular surroundings. I don’t necessarily mean that in a positive sense. I just mean that there is a whole spectacle of new-Russian wealth gushing unstemmed about the bronze image of the deacon who printed pious religious texts well over 500 years ago. It is now cradled in the sparkle of high-rent spaces occupied, as you see, by Maserati, Ferrari, Bvlgari, Bentley and other “high-end” companies. What I find interesting is that the modest printer does not suffer all that much for the comparisons that arise. Look at the last picture below and see how well he stands up to the “Billionaire” man sulking behind him.
The monument has stood in various places since it was unveiled in 1909, the work of the sculptor Sergei Volnukhin and architect Ivan Mashkov. I first saw it in more or less at this position in the late 1980s. It then had a much more organic connection to its surroundings – a very nice used bookstore was located where the Ferrari showroom now stands, right behind Fyodor. (See the central photo in the trio above.) In my mind’s eye I still see that bookstore whenever I go by this location, and I still perceive all the new rich tenants as temporary usurpers. For the record, the monument stands alongside Teatralny Proezd (Theater Passageway) No. 2. 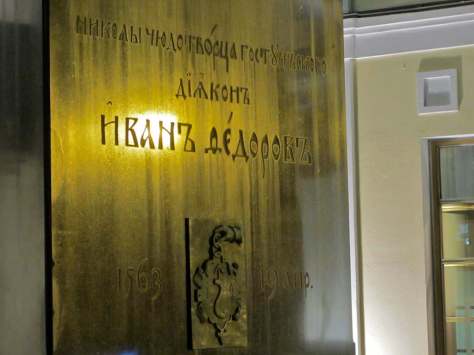 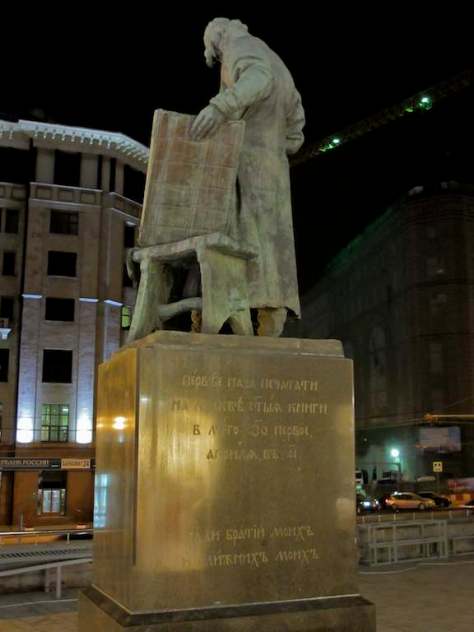