Ah, yes, the charms of ignorance again. No, not of innocence. That’s long gone. Of ignorance. I still command plenty of that.
I was amazed a few years ago when I first ran across this plaque commemorating the fact that Nikolai Smirnov-Sokolsky lived in this lovely building at 30/1 Malaya Bronnaya Street, smack-dab across from Patriarch’s Pond. I knew who Smirnov-Sokolsky was. But how did anybody else know, I thought harrumphingly to myself. I knew Smirnov-Sokolsky from my work on the playwright Nikolai Erdman. In his early years as a writer, before he wrote plays for the great Vsevolod Meyerhold, Erdman was a popular and talented author of skits for nightclubs, cabarets, music halls and even the circus. One of the people he occasionally wrote material for was Nikolai Smirnov-Sokolsky, who hosted and emceed many of the comic evenings that took place in such venues. In fact, Erdman immortalized Smirnov-Sokolsky by mixing his name comically with the famous clown duet Bim-Bom in a skit called “The Qualification Exams” in 1924. Here is how he did it:

The exchange goes on for some time, as the Balladeer, trying to get his performer’s license renewed, admits that he wants audiences to confuse him with the real people…

EXAMINER 2: You seem to forget that a name like that might arouse objections from a second party.
BALLADEER: That’s impossible. There are so many Bims, Boms, and Sokolskys these days that you can’t even call them names anymore. Properly speaking, they’e become a sort of mass market product… 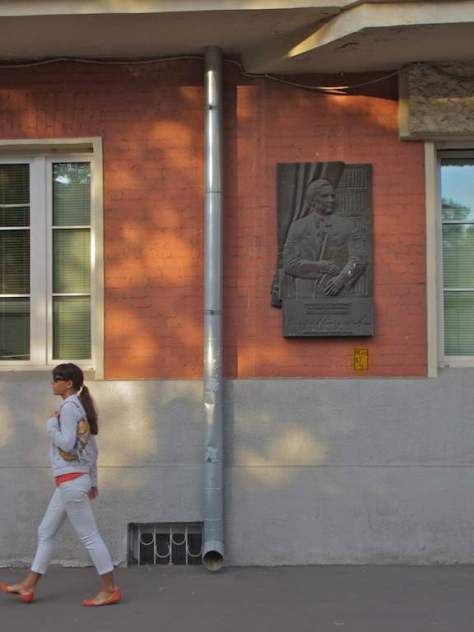 Yeah, but how many people know Nikolai Erdman’s “The Qualification Exams”? Or the texts performed by Smirnov-Sokolsky in the cabarets in Moscow in the early 1920s? But this is where we come to another important moment in my ongoing education in the world. Smirnov-Sokolsky, it turns out, was one of the founders of the huge and hugely popular Estrada Theater in Moscow, a venue for light comedy and popular music that is located in what is now called the House on the Embankment. (See more about that in a post I made in May.) From the 1930s to the 1960s he was an extremely popular performer of his own comic texts. And, just to keep things mixed up a bit, he was an important bibliophile. What? Yes, this comedian amassed an extremely important collection of first and early editions of major writers that counted over 19,000 books. So that’s what all the books are about behind him in the plaque! He also specialized in books banned in the Tsarist era. His collection now comprises a large segment of the book museum at the Lenin Library. If that wasn’t enough, Smirnov-Sokolsky himself also wrote several valuable books about the book and publishing industry in Russia. So important was his work in this field that, according to Russian Wikipedia, he was dubbed the “Knight of Books.” My hat’s off to the man for more reasons than one, now.
For the record, Smirnov-Sokolsky lived in this building that, in my opinion, has a bit of a New Orleans swing to it, from 1927 until his death in 1962. He was born in 1898 in Moscow. The excerpt from Erdman’s “The Qualification Exams” is quoted in my translation from A Meeting About Laughter: Sketches, Interludes and Theatrical Parodies by Nikolai Erdman with Vladimir Mass and Others, which, if you buy used, can be had for a half-way decent price.