Samuil Marshak (1887-1964), as Russian Wikipedia has it, was a “Russian-Soviet poet, playwright, translator and literary critic.” That’s a pretty big plateful. I’m writing about him today because I got a call from a British radio company doing a piece on Russian-British cultural connections. In addition to wanting to discuss current problems and affairs, they asked me to say a few words about the place occupied in Russian culture by Walter Scott and Robert Burns. I did what I always do in these situations, I said, “Sure,” even though I know only the barest of the bare about Scott and Burns in Russian lit. Everybody knows that Walter Scott’s novels deeply influenced all of 19th century Russian literature through Pushkin, Tolstoy, Dostoevsky and others. Dostoevsky, apparently, at one point indicated that he began writing novels thanks to Scott. Perhaps less known is that Burns has been an extremely popular poet in Russia over the last two centuries. Which brings us back to Marshak. During my brief and rushed bit of research, I learned it was Marshak’s translations of Burns that really made the Scottish poet popular in Russia. The first of these translations appeared in 1924 and he continued to add to the “canon” for three decades. His English was presumably good, since he studied English language and literature  at London University from 1912 to 1914. The biggest collection of Burns poems translated by Marshak was published in two volumes in 1963 and contains 171 poems, “about one fourth of the number of poems Burns wrote,” according to Yan De-you’s article “On Marshak’s Russian Translation of Robert Burns,” which is available to be read on the net. Most sources point out that Marshak’s translations, like those of others in Tsarist and Soviet times, were changed, shortened or “edited” to suit the censor. Marshak purposefully avoided translating poems with religious content or imagery, unless it had a satirical bent. So well received and so popular were Marshak’s versions of Burns that he has been called Burns’s “second original.”

Burns aside, Marshak was best known and loved in the Soviet Union for his children’s writings. But as the head of the children’s literature bureau at Gosizdat, a state publishing house, he had a strong impact on the work of others as well. For instance he was an early champion of the work of the great absurdists Daniil Kharms, Alexander Vvedensky, Nikolai Oleinikov, Nikolai Zabolotsky, and of the future great author of dramatic fairy tales Yevgeny Shvarts. He lived a rich and fascinating life that was deeply affected by his Jewish background. Unable to study or even live in the main Russian cities before the Revolution, he had to rely on friends such as Maxim Gorky or Fyodor Chaliapin to skirt residency laws. He traveled much, meeting his future wife during a long journey to the Middle East in 1911. Some of his cities of residence included: Voronezh (where he was born), Petersburg (at various times later – Petrograd and Leningrad), Yalta (at Gorky’s dacha), London, Finland, Petrozavodsk, Yekaterinodar, Moscow… He moved to Moscow after the publishing house he had created in Leningrad was closed by the authorities in 1937 and many of the employees and writers were arrested. He wrote poetry, prose and drama. He translated prodigiously, some of his authors including Shakespeare (sonnets), William Blake, William Wordsworth, John Keats, Rudyard Kipling, A.A. Milne and Jane Austin. As was common in the Soviet Union, where traditions and methods of translation were extremely good, he also translated from languages that he didn’t know, working from the line-by-line translations of others. One of the most curious poets that he translated was Mao Zedong.
As you can see, I took these photos of the Marshak plaque on the building at 14 Zemlyanoi Val – that’s a leg of the so-called Garden Ring on the eastern side of Moscow – in winter. For a couple of years, until 1941, he was a neighbor of the composer Sergei Prokofiev, to whom a plaque was also erected on this building. Marshak lived here from 1938 until his death in 1964. 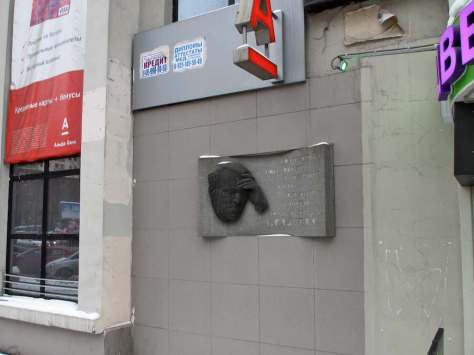