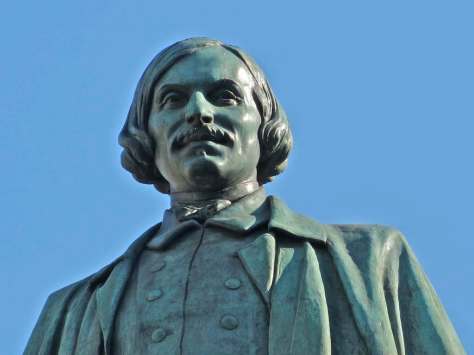 At first glance it’s an almost cherubic face with a piercing gaze. It is, in other words, the absolute opposite of the monument it was created to replace – the one we talked about in yesterday’s blog, the so-called “mourning” Gogol that was erected in 1909. This Nikolai Gogol, created by Nikolai Tomsky, and erected on Prechistensky Boulevard (now Gogolevsky Boulevard) in 1952, was done with Joseph Stalin’s approval. It presented what many had wanted for decades – a monument to strength, to power, to health, to greatness (in that narrow definition of unassailability) – to all those things that governments and weak-willed individuals tend to worship unthinkingly. The tie is just right. The buttons are in order. The cloak hangs regally, the face gazes forward boldly, the left hand holds the book lightly but with certainty. I don’t want to say this is a bad monument. It isn’t. It is effective in its own way. But because of its history – it was created specifically to replace another work – it cannot stand on its own merits entirely. It is tied to the monument that it defeated in place, but to which it loses in artistic quality.

But there is a fascinating backstory here. To rely again on my friend Stephen Moeller-Sally’s excellent book Gogol’s Afterlife: The Evolution of A Classic in Imperial and Soviet Russia, this new monument sneaked Stalin’s own visage into that of Gogol’s. Steve places photos of a portrait of Stalin next to a bust of Gogol that Tomsky made in 1951, and for which he was awarded the Stalin Prize. The similarity of the two faces is striking. I would even say it is undeniable. (For the truly curious among you, this is on page 159 – if you can’t break into it on Google books, do the honorable thing and buy Steve’s book.) That might explain why Tomsky was chosen to do the larger monument, and it also would justify why a shadow of Stalin’s face still lurks in it.
“What could have been the point of this metaphoric joining of Gogol and Stalin?” Moeller-Sally asks. “Why did Gogol become a symbolic double of the Great Leader? To begin with it is worth pausing over the paradoxical position that Stalin occupied in relation to the [current] patriotic campaign. Although he championed Russian ethnic primacy after the war, and had even laid the foundation for the campaign in his victory toast to the great Russian nation in 1945, Stalin himself was a Georgian. Strange as it may seem, Gogol was therefore in a position to justify the Leader’s patriotism. Gogol, after all, was also a non-Russian – an impostor from the South – who nonetheless occupied a central, authoritative place in Russian culture. Indeed, Russia was the most important theme of his mature work. No one would have challenged the Ukrainian Gogol’s devotion to Russian culture, so why then dispute the patriotism of the Georgian Stalin?”
Moeller-Sally goes on to write: “The new monument openly attributed to Stalin the powerful Gogolian gaze, which, in its creator Tomsky’s words, could ‘penetrate the human soul.’ The theme of the all-seeing eye appears frequently in Gogol’s fiction and would have had a special resonance at the beginning of the 1950s, when rumors alleged that Stalin was preparing for another purge. For example, a chain of metaphorical substitution connected Gogol and Stalin with the Inspector General, who symbolized a promise of vengeance for corruption and other ‘little sins’ against the state. Thus the erection of the new monument presaged the coming ‘last judgment.'”
In my opinion the photo that shows the Stalinesque gaze best of all here is the last one below.
Is Steve going too far? Well, I’ll tell you what, if you stand around the Tomsky monument for too long you begin to get the creeps. In all its “healthy power” it is off-putting in a kind of supernatural way. It’s too damn “positive” in the way that the Hitlerjugend were. Steve provides me with a convincing  reason as to why I have that reaction.
Now two more things. 1) Stalin got his comeuppance. This monument was unveiled March 2, 1952. Exactly one year and one day later Stalin died. Take that. Zap! Gogol’s demons did it. Believe me. And 2) Pigeons take their revenge as well. As I was photographing, a pigeon alighted on Gogol’s head and peed. If you look at Gogol’s cheek in the last photo immediately above, you’ll see the trace of urine curling down under his chin. I prefer to think that the pigeons know whose face they really are defiling.

Join 115 other subscribers
Follow Russian Culture in Landmarks on WordPress.com